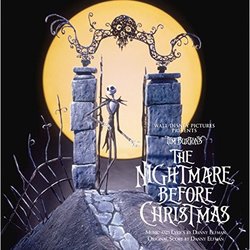 The Nightmare Before Christmas - Special Edition

Even now, The Nightmare before Christmas remains one of Danny Elfman\'s pinnacle works (along with his Batman scores and Edward Scissorhands). Released quietly in the fall 1993, the movie was a modest success. However, not a single number was even nominated for a Best Song Oscar and this was during Disney\'s unstoppable early 90\'s domination of the category. The movie was originally considered "too dark" to connect with family audiences. Time does have a way of righting such wrongs and over a decade later, the movie is one of Disney\'s biggest cult classics, if there can be such a thing.

Unlike a lot of Disney Musicals, a large majority of Nightmare is told through song. The story was original a poem, so Tim Burton and Elfman emulate that tone as much as possible. They worked chronologically through the material, Elfman writing one song at time and making them organically fit the story structure. In Beauty and the Beast or Aladdin, the songs were used for establishing character and location or stopping the story to allow characters to comment on their feelings. Almost all of Jack Skellington\'s strong character moments are told through the musical numbers. From his initial despair ("Jack\'s Lament"), to his discovery of Christmas Town ("What\'s This?") to his decision to take it over ("Jack\'s Obsession") to his final cathartic realization of its consequences ("Poor Jack").

Also unique is the liberal use of singspiel (German for "song-play" or "sing-speak") with much of the music half sung/half spoken. While some songs are driven on strong melodies ("This is Halloween", "What\'s This?", "Making Christmas", "Kidnap the Sandy Claws") with the sub verses using singspiel, whole songs use the technique without a strong main verse ("Town Meeting Song", "Jack\'s Obsession", "Poor Jack"). Much like Stephen Sondheim or Bertolt Brecht, the staccato rhythm of Elfman\'s music is punctuated with clever and macabre lyrics that emphasizes the ghoulish humor that appeals to kids ("There are children throwing snowballs here instead of throwing heads/They\'re busy building toys and absolutely no one\'s dead!").

Musically, the score has the same eclectic influences of Elfman\'s 80\'s to mid-90\'s work (Bernard Herrmann and Nino Rota). Most of the non-number tracks are the movie\'s more quiet and contemplative moments ("Doctor Finkelstein / In the Forest" ,"Nabbed", "Jack And Sally Montage"), but there several exciting tracks as well ("Christmas Eve Montage" and "To The Rescue"). Sadly, my favorite moment in the score is missing (the cue where Jack flies out of Halloween Town). The album is bookend by two tracks ("Opening" & "Closing") narrated with the right amount of "jolly" edge by Patrick Stewart. These two tracks are so warm and inviting that I was disappointed when I saw the movie. The opening narration used the voice of the actor who played Santa Claus in the film and the second track wasn’t used all together. While these bookends were made after the fact, "Closing" in particular wraps up the story\'s themes so beautifully that its omission leaves the movie\'s climax slightly lacking.

Performance-wise, Burton regulars Paul Ruebens, Catherine O\'Hara, Glenn Shadix and Broadway legend Ken Page provide strong voices. The star of the show, though, is Elfman. Singing both Barrel and Jack Skellington, Elfman dominates with his stunning range. After a decade of leading Oingo Boingo, Elfman wrote the material to clearly showcase his range. There has been talk of doing a Broadway version of the show, but without Elfman headlining, I don\'t really see the point.

For it\'s 13th Anniversary, the soundtrack has been re-released to coincide with the new 3D presentation of the movie (which it is quite amazing). Included with the original soundtrack is a bonus disk of extra music, spotlighted by covers of the songs by popular and up and coming artists. The two most interesting tracks are the headliners (Marilyn Manson doing "This is Halloween", Fiona Apple doing "Sally\'s Song"). Manson and Apple navigate the narrow balance between honoring the song and making it their own at the same time.  The other covers are not as interesting. "What\'s This" is envisioned as up-beat So-Cal music by Fall Out Boy.  It feels more like a corporate choice than a creative one. I can see how She Wants Revenge\'s goth retro new-wave style could fit Elfman\'s music, but "Kidnap the Sandy Claws" is the wrong choice. The disk is finished up by four tracks of Elfman\'s original demos, with Elfman doing all of the voices and simple synthesizer arrangements. It\'s so quirky and interesting that there\'s worth an album of their own (hint, hint - take that back- suggestion, suggestion).

For those interested in only the new tracks, they can be heard on the soundtrack\'s MySpace site. Unfortunately, the iTunes music store only lets you get these exclusive tracks album only, so it is everything or nothing. I\'m on the fence on whether to recommend this new release to casual listeners who already have the album. For anyone who doesn\'t own the album (what\'s wrong with you?) get it and fans of Elfman and of the movie (I know there\'s more than a few of you out there) should eat this up and I consider it a worthy purchase.