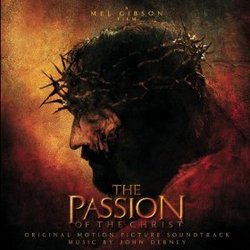 The Passion of the Christ

Review: Passion of the Christ, The

It seems that whenever a film is made about Jesus, there is bound to be some kind of controversy.  With The Last Temptation of Christ, Martin Scorsese dealt with a negative backlash.  With The Passion of the Christ, Mel Gibson has been accused of anti-Semitism, among other charges.  Regardless of your feelings of the film, it's the most successful R-rated film ever, and as of this writing, has already passed the $300-million mark.  That kind of success is noteworthy, especially for a film which was originally expected to fail.  Why it succeeded is open to various interpretation, but it probably goes without saying that it has an audience that was not only receptive to the film, but to the soundtrack as well.  The Passion of the Christ is the most successful soundtrack album since Titanic.  Except that this features no pop song by a Canadian diva.  Instead, John Debney's score is filled with ethnic percussion and instruments, vocal chanting, and a rather classical "biblical epic" sensibility.

In "The Olive Garden", dark ominous creepy music is enhanced by Martin Tillman's electric cello (as he had done previously on Black Hawk Down).  The dark music continues in "Jesus Arrested", sounding quite like something Debney might have written for a horror film. However, to break up the darkness, "Bearing the Cross" is sequenced between these two tracks, allowing for a rather religious moment, with a full choir building slowly through the rhythms and ethnic instruments.  "Peter Denies Jesus" hints at a rather classical chord sequence that will be fully featured at the end of the album, but it's an emotional cue nonetheless.  "The Stoning" occurs during a flashback sequence, and for this moody cue Debney worked with Shankar and Gingger, "the only two people in the world that play the Double Violin" (according to their website).  It has a rather unique sound to it, as one would expect.

"Simon is Dismissed" is a raucous cue with atonal melodies and atmospheres.  It should be noted that as dialogue in the film is spoken in Latin and Aramaic, the audience is not really listening to the words.  Sure they're hearing them, but they're not interpreting them as you would normally.  That leaves the sound effects and music as the primary audio tracks.  While Jesus is being scourged, the music is strong and prominent ("Flagellation / Dark Choir / Disciples").  "Mary Goes To Jesus" is a highlight cue, featuring sweeping orchestra and soloist Lisbeth Scott.  Speaking of vocals, Mel Gibson contributed to chanting and other vocalizations on the soundtrack, although I couldn't pick him out exactly.

"Crucifixion" is a more traditional score piece, and the next few tracks ("Raising the Cross", "It Is Done", "Jesus is Carried Down") all progress the storyline through a combination of full orchestra, ethnic instruments, and vocals.  One could arguably point out a few similarities to Peter Gabriel's music from The Last Temptation of Christ, but I think it's just that both scores used a lot of percussion and ethnic instruments.  The piece-de-resistance, the last cue on the album and the final cue in the film (which goes over the end credits) is "Resurrection".  This full choir, strings, and percussion work on a very strong emotional level, and it easily brings to mind some of the more classic epic biblical scores from the 1950s and 60s, but with more ethnicity than you would ever find in those films, ironically.

John Debney has been one of the busier film composers working today, tackling sometimes five or more films a year.  However, his work on The Passion of the Christ is easily some of his best work in recent years.  Already the soundtrack's (and film's) success has given Debney greater recognition to the general public, and I personally hope that it gives the general audience out there a larger appreciation of the craft of film music.  Meanwhile, get the soundtrack.  If you've seen the film, you know how well it works. If you haven't seen the film (or are avoiding it for personal reasons), get the soundtrack!  There is much less controversy in the music, and you won't be disappointed.