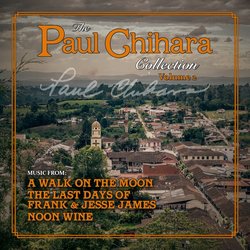 Dragon's Domain Records, to be distributed through buysoundtrax.com, presents the The Paul Chihara Collection - Volume 2, featuring music composed, conducted and produced for three films by Paul Chihara. Composer Paul Chihara has had one foot in film scoring (having composed scores for over 90 motion pictures and television series) and the other in concert music for more than 45 years. Currently, at the age of 80, he shows no signs of slowing down, remaining active composing concert music and interacting with music, musical theater, and musicians throughout the world.

The three scores collected on this second volume of Chihara's film music have a lot in common, musically. Each are from the mid 1980s, each demonstrates the composer's deft articulation with melody, harmony, and the seamless integration of popular, folk, and classical styles, although the movies themselves are quite different.

Set in 1969, A Walk on the Moon tells the story of an idealistic Peace Corps volunteer named Everett Jones (Kevin Anderson) who is happy to be assigned to a remote Colombian village. When he arrives, he is confused by the cynical attitude of his predecessor (Terry Kinney) and the apathy the villagers seem to hold toward him, but he manages to take up with a shy native girl named India (Patrice Martinez) as he becomes more immersed in their native culture. This adventure drama was directed by Raphael D. Silver (his daughter Dina Silver produced) and was filmed in Mexico, standing in for the landscape of Colombia. The film was nominated for Best Feature at the 1987 Chicago Film Festival, and nominated for the Grand Jury Prize at 1987's Sundance Film Festival.

A Walk on the Moon is a splendid score with engaging textures and a remarkable contrast between North American country/folk and South American ethnic music which serves the story's meeting of the two worlds as much as it presents a compelling listening experience on its own. As the music follows Everett from 1960's New York City to the lushly forested foothills of western Colombia and the northern Andes, Chihara's music follows suit. The score is primarily monothematic with a single theme. As the movie progresses, the music becomes by measures more ethnic in quality until Everett, having absorbed the culture and people, must face a bittersweet farewell to the village he's grown to care for but is unable to stay within.

Airing on television in 1986, The Last Days of Frank and Jesse James was a Western biopic with a casting novelty – the main cast was made up almost entirely of country music stars – Johnny Cash played Frank James, Kris Kristofferson played Jesse, June Carter Cash co-starred as the mother of both James boys, while Willie Nelson and David Allan Coe were featured in supporting roles. Actress Marcia Cross co-starred as Sarah Hite, Jesse's romantic partner. Filmed in Springfield, Tennessee, the movie was directed by William A. Graham, a veteran director of TV episodes and movies, with a handful of feature films to his credit), from a script by William Stratton, who was known for writing for TV movies and series episodes throughout the '70s and '80s.

Although Chihara wrote a full score for the film, only four tracks could be located to include on this collection. The first is a rendition on tack piano based on the 19th-century American folk first recorded in 1911 by Bentley Ball and subsequently by many others (including Johnny Cash). The tack piano was recorded for use as a source cue, heard in a tavern scene. "The melodies that I composed for this film were based on my studies of old cowboy tune collections," Chihara said. "They sound authentic, but also like good old fashioned Hollywood movies by Max Steiner and Dimitri Tiomkin, they are the musical role models in this score."

Part of the PBS "American Playhouse" series, Noon Wine aired in 1985 and was the second filmed version of renowned American writer Katherine Anne Porter's popular short novel. The film stars Fred Ward, Stellan Skarsgĺrd, Lise Hilboldt, and Pat Hingle, and is an effectively nuanced psychodrama set in 1890s Texas, when a stranger from North Dakota arrives at a small dairy farm seeking work. The family who owns the farm hires him and the farm flourishes. After many years a second North Dakotan stranger arrives, which puts into motion events that wind up having a tragic outcome for all.

The score is a mix of folk and country, favoring guitar and mandolin, which adds to the film's conceptualization as a Western-styled tale of conflict. The score describes and contrasts the narrative's sense of shifting claustrophobia and enigmatic characterizations. Unlike the gentle, harmonic treatment of the other two films, the music for Noon Wine is complex, sometimes spare, and frequently as intense as the unfolding drama and the psychological underpinnings of the socially uneasy characters who populate the saga while remaining within the pop and classical musical idioms. Among the notable performers on this score are mandolin player Andy Statman and legendary harmonica player Toots Thielemans.

Dragon's Domain Records is excited to bring Paul Chihara's music for A Walk on the Moon, The Last Days of Frank and Jesse James and Noon Wine to compact disc for the first time on The Paul Chihara Collection - Volume 2 mastered by James Nelson at Digital Outland with exclusive liner notes by author Randall D. Larson, including the participation of the composer. The Paul Chihara Collection - Volume 2 is a limited edition of 500 units.