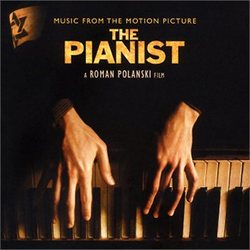 Roman Polanski's latest film, The Pianist takes place during World War II, and focuses on the true story of Polish Jew and celebrated concert pianist Wladyslaw Szpilman, and how he survived through the war.  Composer Wojchiech Kilar reunites with Polanski to provide the underscore to this acclaimed drama, but the soundtrack is instead filled with plenty of classical music by Chopin.  Performed expertly by Janusz Olejniczak, these piano pieces are moving and darkly edged - as one would expect from Chopin.  The music evokes a stark grey feeling that accurately matches the film.

The one score track by Kilar runs a scant 1:52 in length, and has a rather melancholy, but slightly optimistic Jewish feel to it.  The last track is an older recording of a Chopin piece that the real Szpilman recorded (so the quality is that of an older recording).  Unless you're aching for another album filled with Chopin, this is a tough one to recommend.  It's great stuff, but it would have been much nicer had there been a little more of the Kilar stuff to make it stand out from the other classical albums.