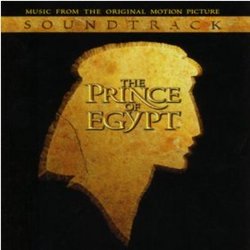 The Prince of Egypt

Review: Prince of Egypt, The

The Prince of Egypt was one of the more highly anticipated films of 1998.  It not only was DreamWorks' first foray into the realm of animated feature films, but it also heralded a new generation of how animated films are created.  Using a slick mixture of computer-generated imagery and traditional hand-drawn animation, it was certainly a film of "epic" proportions.   Such a film would require a score of similar proportions - enter Hans Zimmer.

Zimmer had already won his Oscar for working on an animated feature film: The Lion King.  As composer on The Prince of Egypt, Zimmer would end up merging his own style of scoring with Middle Eastern instruments and the songwriting talent of Stephen Schwartz.  Schwartz had already won his Oscar for Pocahontas.  With such talent behind the music, it was almost a guarantee that such collaboration would result in a runaway hit.

Unfortunately, they were only half-right.  With three (yes, three!) separate CD releases for The Prince of Egypt, DreamWorks Records may have unintentionally flooded the market to such a degree that the public just didn't know what to do!  There is the Soundtrack Album, the Nashville Album, and the Inspirational Album.  But in this age where "Music From and Inspired By" seems to be the norm for soundtracks as opposed to "Music From", even the Soundtrack Album ends up being a "Music From and Inspired By" album - even though it truthfully is not.

How?  Well, there are quite a few songs on the album which do not appear in the film - they appear in the end credits, and for the most part have nothing to do with the movie (except for the over-played "When You Believe", performed by Maiah Carey and Whitney Houston).  It is therefore unfortunate that due to the limitations of CDs (78 minutes), the choice was made to sacrifice score for songs.  The songs, for the most part, are interesting, but not as good as they could have been.  Schwartz seems to use up all his energy on the first song ("Deliver Us") which features singer Ofra Haza and a large chorus singing through the opening sequence of the film.  A powerful song, it raises our expectations for the other songs in the film - which unfortunately don't rise to the occasion.  Even the highly-touted "When You Believe" falls a bit short in comparison to "Deliver Us", and I know that Schwartz has done better.  "The Plagues" is another notable standout, however.

Fortunately for Schwartz, Zimmer (ala Lion King) lent his touch to the orchestrations on the songs, so there is a continuous texture throughout the film (unlike Mulan, which suffered from the lack of apparent collaboration between Jerry Goldsmith and the songwriters).  Zimmer provides a very thematic score, which themes for (among others): Moses, God, Rameses, Moses & Rameses, Tzipporah, The Slaves, Seti, and the Egyptians.  All are unique, and all are memorable although it can get a tad bit confusing trying to identify all of them without keeping notes.  Once again, Ofra Haza contributes her vocal talents in the score, which not only adds a great ethnic flare to it, but also makes scenes even more powerful than they were to begin with (see the last bit of "The Burning Bush" for an example).

Since this is the "Soundtrack" Album, one would hope that the music from the film would be adequately represented.  Unfortunately, as I mentioned earlier, this is not the case.  There was over 60 minutes of score in the film, and of that amount only 20 appear on the album.  Such notable sequences missing are the Chariot Race, the Nightmare, Moses Confronting Pharaoh, and of course the Finale.  See the special article (coming soon to Soundtrack.Net) focusing on the score for more information on those cues (and others).  But one still has to be grateful that there is some score on this album - after all, it is not uncommon for some soundtracks to have no score whatsoever.

Zimmer does an excellent job on the score - it's powerful, emotional, and full of action in all the right places.  Lending their assistance to Zimmer (in the area of orchestrating the songs) were Media Ventures residents Harry Gregson-Williams, John Powell and Gavin Greenaway.  Their orchestrations are also worth noting - if you can listen past the vocals on "The Plagues" and "Playing With The Big Boys" you can hear some really good stuff going on.  It is because of the continuity in the texture between the score and the songs that makes this album work at all.  Fortunately the "pop" songs are all lumped together at the end of the CD (with the exception of Mariah and Whitney, which are at the head).  As mentioned before, the Finale is missing, so there is no real tangible climax and conclusion to the CD.

There are three albums for The Prince of Egypt.  Only one is truly worth picking up (as a soundtrack from the film), and because of the lack of choices, I would highly recommend this disc as a nice way of getting a taste of the soundtrack to the film.  It should be noted that the Wal-Mart CD sampler (I'm told) has 3 more tracks of score which don't appear on this CD.  Why they would do that is beyond me, and it makes getting a more complete score experience all the more frustrating.