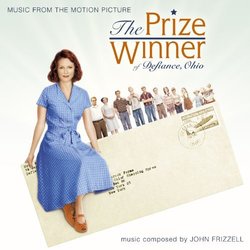 The Prize Winner of Defiance, Ohio

Composers rarely get recognized for the scores they write to smaller films, those pictures where catering is provided by the director\'s sister-in-law. I don\'t think people regularly walk up to David Arnold and tell him about how good The Young Americans was. I don\'t think John Williams gets a lot of mail regarding his 1960 score to I Passed for White (tagline: "I look white... I married white... Now I must live with a secret that can destroy us both!"). Likewise, in the grand scheme of things, it\'s entirely possible John Frizzell\'s music to 2005\'s The Prize Winner of Defiance, Ohio gets lost in a sea of much more epic and flamboyant scores. Yet, according to the composer himself, this is his most personal and true-to-himself piece of work yet.

Gone are the synthetic shrieks of Alien: Resurrection.

Gone are the rolling snares and patriotic strings of Gods and Generals.

In The Prize Winner of Defiance, Ohio, we meet a much gentler John Frizzell who crafts American melodies inspired by both early 1950s rock and roll and bluegrass. We are introduced to his devil-may-care theme in "Main Title", where piano, fiddle, guitar, bass, and acoustic drums come together to establish the rural locale and the unstoppable enthusiasm of Evelyn Ryan (Julianne Moore) whose talent with words and poetry made her a frequent winner of jingle contests from 1956 to 1963. The prize money was put to good use as Mrs. Ryan had ten kids. John Frizzell himself is no stranger to jingle writing: he paid the rent writing jingles for a few years before he got his big break in the film scoring business.

Racing violins and woodwinds introduce us to "Anatomy of a Contest" which makes great use of pizzicato progressions to emulate the sound of 1950s-1960s game shows, complete with arpeggiac sweeps on the harp. The music could have become a silly pastiche, but Frizzell keeps it honest and never makes fun of the era. His cue "Tulips" showcases the violin work of Sara Watkins, one third of the modern bluegrass band Nickel Creek. Another band member, Sean Watkins, provides a gentle melody in the following cue, "Feet First". These quiet pieces are the heart and soul of John Frizzell: minimalist in orchestrations but melodically strong. Ukulele and doo-wop vocals make their way onto "Ryan Family Album" while the last score cue of the album, "Shopping Spree", erupts into an all-out early rock and roll song with female singers and electric guitar. This is music which can really turn a frown upside down.

Frizzell\'s score is complemented by a series of 1950s songs, such as "Bye Bye Blues" and "Rag Mop", and the shift from score to songs and back to score again is flawless because the style is identical: both score and songs function as mainly instrumental bluegrass, jazz, rhythm and blues, and rock and roll songy pieces. What is amazing, though, is the careful balance that Frizzell achieves, perfectly replicating the sound of the era while introducing themes and harmonic progressions that carry basic film score functions.

John Frizzell\'s compositions for sci-fi and horror pictures might have been interesting in their own rights, but the stripped-down and honest Prize Winner shows a much more impressive talent than Alien: Resurrection might have foreshadowed. This is the real John Frizzell. While The Prize Winner of Defiance, Ohio might not ring any bells five years down the road, it might be wise to remember it as one of the first Frizzell scores that established his voice and the shape of scores to come.