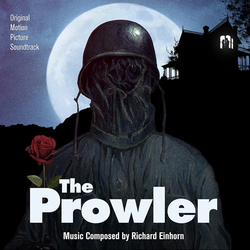 Howlin' Wolf Records proudly presents The Prowler by composer Richard Einhorn. At the height of the success of slasher films came The Prowler (1981), one of the many independently produced entries in the subgenre. The film was directed and co-produced by Joseph Zito, best known for films including Friday the 13th: The Final Chapter and action films Missing in Action, Invasion USA and Red Scorpion. The Prowler is also known for its hard-edged violence with special effects by Tom Savini.

Composer Richard Einhorn's early work in film scores was primarily electronic. With The Prowler, the composer transitioned to using live acoustic instruments. The score for The Prowler is full of lush orchestrations for strings, winds, and brass. While The Prowler does incorporate some electronic studio effects, they are used to enhance the impact of certain moments rather than be the focal point. Assembled and mastered for CD by Ian Zapczynski from 15 ips master tapes, The Prowler features the complete score in 35 tracks.

With liner notes by Ian Zapczynski based on research and an in-depth interview with Richard Einhorn, The Prowler showcases a 16-page full-color booklet including Nestor Puchetti's original illustrations with art direction and designs by Luis Miguel Rojas. The Prowler is a limited pressing.