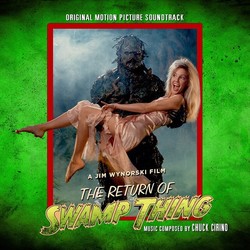 The Return of Swamp Thing

When it came to music, Wynorski brought in his friend, composer Chuck Cirino, who had begun scoring all of Wynorski's films since 1986. Their passionate mutual interest in Italian composer Ennio Morricone brought them together in the mid-1970s and their friendship was strengthened when both wound up in Los Angeles shortly after Star Wars was released. By the time Wynorski began directing, Cirino had gotten into writing music as well as directing and editing.

When they came to collaborate on The Return of Swamp Thing, the film's budget was sufficient enough to accommodate a few live instruments in addition to Cirino's electronic set-up, including a small brass section containing flugelhorns and trumpets, a recorder soloist, and an Electric Valve Instrument player. Everything else was synth. Remarkably, The score was recorded in a cramped and complicated set-up in the bedroom of Cirino's Van Nuys home. There are actually two scores to The Return of Swamp Thing; well, one and a half scores to be precise. One is present in the film and occupies the majority of this complete score album. The second can be heard in the 22-minute suite that concludes the track list. Cirino's score for The Return of Swamp Thing is full of exciting thematic material and fans of the composer have been long anticipating its release.