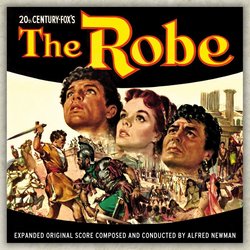 Like Christ, Alfred Newman's heavenly score to the 1953 psychological biblical epic The Robe has risen from the dead. Long out of print, La-La Land Records resurrects one of Mr. Newman's greatest scores, fully remastered and slightly longer than previous editions. This epic score has been given the Redman/Hersch/Matessino attention it so richly deserves. Never has this powerful score sounded so divine.

Insightful liners by the lovely Julie Kirgo and masterful art direction by Dan Goldwasser also add to this classic reissue on 2 CDs.