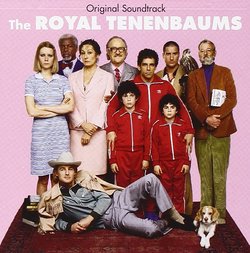 The Royal Tenenbaums, continues the tradition of films directed by Wes Anderson, preceded by Bottle Rockets and Rushmore, as a film that discovers the humor in the often pathetic struggle of people who are desperately stuck in their place in life.  In this case, the Tenenbaums are a family of over-acheivers (excluding the under-achieving Dad, played enthusiastically by Gene Hackman) who hit their stride too early in life, and find themselves floundering as adults.  Like the film, the soundtrack is good at being cute and clever, but never seems authentic in its emotions.

Director Wes Anderson has a very dry, absurdist humor, which served him well in his previous outings, but by the time we get to Tenenbaums, it starts to feel too self-aware.  He sets all the floundering characters up at the beginning with a flourish, but then their subsequent journey to redemption is unremarkable.  There are very funny and well-done moments, i.e. a certain scene involving tennis and bare feet, but overall, the film seems much more interested in style than substance, and what is intended to be a dark comedy with an emotional center comes off more as a dark drama with comic moments.  Led by the skilled writers Wes Anderson and Owen Wilson, the talent in this film is very impressive, but it makes the mistake of being too self-aware.  The film is certainly enjoyable enough, but the high bar set by the writers from earlier work was not reached with this one.

The soundtrack, which has both original music by Mark Mothersbaugh, as well as older pieces by The Clash, Nick Drake, The Velvet Undergound, Nico, and others, is certainly fun and whimsical. Early on, the Tenenbaums seem to have a charmed existence, and the score does an extremely good job of setting up an ironic, fairy-tale atmosphere. Where the score gives an old-school feel to the film, the rock songs by The Clash and others give a nice jolt to certain scenes.  Anderson knows his Generation X audience, and these pieces, though often from a previous generation, keep this audience in the loop and interested.

Though the soundtrack does a great job of evoking a magical, ironic tone to the film, it, like the script, fails to give the film a strong emotional center.  The characters do technically grow by the end of the story, and you can even trace this development through the script, but the story lacks the heart (or maybe the heart is just too damaged) to make us feel a part of the journey.  The soundtrack is "fun", but it does not evoke the pathos of any particular scene or moment, which a good soundtrack should do.

In conclusion, The Royal Tenenbaums soundtrack is a very good mood piece, and for fans of Wes Anderson films or of the artists on the soundtrack, this might make a smart purchase.  Alternatively, if you did not like the film, or like a little heart with your whimsy, this soundtrack is probably a pass for you.