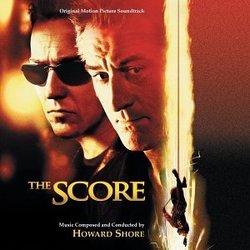 For his first dramatic thriller, director Frank Oz chose to tell the story about a professional thief / nightclub owner (Robert De Niro) and his new partner-in-crime (Edward Norton) as they plan to steal a priceless scepter from the Montreal Customs House.  With small roles by Marlon Brando (as the man who organized the heist) and Angela Bassett (as De Niro's love interest), the film suffered not from quality actors and an interesting storyline, but rather a slow plodding pace that was fixed only towards the end of the film with a truly exciting and riveting climax.  The slow pacing of the film was made less burdensome by a rather jazzy score by composer Howard Shore.  But the score also allowed the tense scenes to be even more nail-biting.

Shore chose a jazz approach to make up the core of the score.  At its most basic level, it is a rather typical brooding Howard Shore score, with the dark progressions and building crescendos.  But on the surface, it feels lighter than that, with solo trumpet and backing horns providing a jazzy sensibility, but while still retaining a sense of dread.

Most of the music contains the same main theme, and slight variations thereon.  "Flashback" uses the same bass line chord sequence, but with a different thematic line.  It's that jazz flexibility that lets the score grow as the story expands.  In a film whose story is inherently straightforward, the score provides an integral role in defining the characters and providing some emotional depth that I found lacking.  De Niro also owns a nightclub, and so the jazz in the score takes on a deeper meaning as he finds himself getting into a situation that is seemingly over his head.

"Suspended" is a truly tense cue that covers most of the climax from the film.  As the action on screen starts to pick up pace, so does the score.  Faster renditions of the main theme as well as harsh string hits accompany the resolution of the heist.  Only at the end does the frenetic jazz slowly ease down, allowing your heartrate to resume its normal pulse.  The denouement of the score softly reprises the main theme, underscoring how all ends up well for our hero (no surprise, right?).

To me, The Score stands out as a great jazzy score.  It goes on the shelf next to other such scores as The Conversation and Taxi Driver - both of which came to mind (for some bizarre reason) when listening to the score.  I would recommend you pick this one up if you enjoy jazzy scores or liked the film.  Running almost 40-minutes long, this was a very satisfying album to listen to, regardless of the seemingly endless repetition of the main theme.