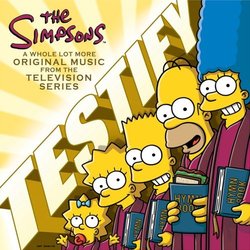 "There are a lot of complicated issues here that can only be explained through song."

This is the third album to The Simpsons\' TV series (after The Simpsons: Songs in the Key of Springfield and Go Simpsonic with the Simpsons) and it still uses the same formula. There are short musical pastiches, celebrity cameos and end credit covers. Has there been any other TV theme has so many various interpretations? Celebrity cameos this time out are even more numerous than usual (The B-52s, David Byrne, Los Lobos, Baha Men, Shaw Colvin, "Weird Al" Yankovic, Jackson Browne and more and more). The album continues the show\'s love affair with lampooning cheesy 70\'s and 80\'s television specials and advertising. And the worse the source is, the better composer Alf Clausen nails it.

The Simpsons has long relished jumping into musical parody. It is a tactic that Family Guy regularly attempts but why it is still more successful on The Simpsons is the sincerity of the parody (as opposed to just an in-joke reference). It also helps that Clausen is the James Brown of TV comedy scoring. He is a machine and even seventeen years later, he\'s still going strong. The nearly-two decade old show developed between the slow death of the television variety show and the parasitic growth of American Idol clones (both skewered on the album) and I think deep down, the writers love the freedom to explore whatever musical style they want. Especially in a day and age when musicals are looked upon with a wary eye. Where else could they do an extended Parody of My Fair Lady ("My Fair Laddy"), Yentl  ("Poppa, Can You Hear Me") and their never-ending trashing of Disney Musicals, this time The Lion King ("King of Cats")?

You may say, hasn\'t The Simpsons  been weak since their mid-90\'s prime? This album covers 7 years, so there\'s enough material to make a good release. It\'s not up to the quality of the amazing first two albums but it is still very solid. Hysterical bits of sample dialogue from the show are left in the track ("Turn down that original cast recording and go to sleep!"). This concentrated dose is much funnier that actually watching the current show on TV.