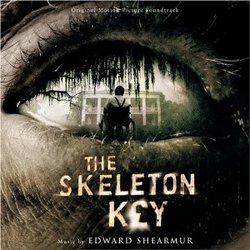 Soundtracks which freely mix score tracks with an assortment of songs from and inspired by the movie have always irked the true movie music fan. The problem is sometimes solved by the dual release of a chart-topping soundtrack and a score album. The Skeleton Key is one of those rare hybrid releases which works because it successfully interweaves its orchestral elements and a handful of well-chosen songs. A score-only pressing would have been weakened by the absence of the songs and a full-length songtrack would\'ve been missing an important orchestral kernel. It\'s a tip of the hat to the album producer who saw fit to mix both songs and score to flawlessly convey feelings of gloom, despair, and loneliness.

The songs range from traditional African call-and-respond fare to modern, hard-rockin\' blues. The turntable-friendly Delta blues of Robert Johnson\'s "Come On In My Kitchen" is joined by the old school plaint of "Mississippi" Fred McDowell\'s "61 Highway Blues" and the bass-string strummin\' and guitar slidin\' of Blind Willie Johnson\'s "God Moves On The Water". "Barefoot Dancing" brings us back to the present with some blues-tinged hard rock along with the over-the-top rock organ riffs of the dejection song "The Goldrush" by Joe Washbourn. Rounding up the non-score portion of the album, "Do Whatcha Wanna" is a catchy big band carnival instrumental piece and "Iko Iko" by the Dixie Cups is a 60s hit straight from New Orleans which recalls traditional African songs.

Ed Shearmur\'s score is firmly rooted in the Southern locale of the movie and switches back and forth between ominous banjo wanderings and chase music based on ritualistic percussions. The "Opening Titles" seem to adapt material from the album opener, "Death Letter" from Johnny Farmer and Organized Noise, with a low key approach characterized by an electric guitar motif, minor key string work, and bluesy banjo figures. The blues mode and the minor mode will frequently collide throughout the score, while they are sometimes left behind entirely in favor of atonality. The chase music starts with "Ben Escapes", where the four-note guitar motif heard in the titles comes back on both guitar and piano, recalling the opening motif of A Nightmare on Elm Street. Then the percussion, both acoustic and electronic, turns the piece into a tribal dance with dissonant violin slashes and wailing, carnivalesque brass. These musical chase sequences are interrupted here and there by atonal intermissions. "Saving Ben" expands upon these ideas, with stabbing violin jabs and atonality. "The Conjure Room" is the last of the chase cues, with the rhythmic ideas behind "Ben Escapes" coming back along with the orchestral stabs and moaning brass. These all-out fright pieces sound like more ritual-inclined Beltrami horror chase scenes.

The dissonance-charged set pieces are complemented by a few moments of respite, namely "Violet\'s Story" and "Hoodoo Woman", which showcase Shearmur\'s seemingly-improvisational banjo work before the African percussion comes back with waves of dissonance on both strings and brass over a distraught accelerando. The album concludes with "Conjure of Sacrifice", which contains samples of an actual ceremony with conjuring prayers and accelerating drum beats, and "Thank You Child", where the electric guitar motif returns and the "Opening Titles" are recalled, allowing the music to come full circle.

The score and songs feed off of each other, with Shearmur\'s moments of musical mayhem and panic giving way to the dark and foreboding respite of blues source music. I don\'t believe the score itself would have been strong enough to warrant a separate release, and the songs themselves might not have caught the attention of the die-hard film music fan. The album for The Skeleton Key succeeds at creating a mood, setting a tone, crafting a sustained feeling of dread and Southern Goth. It\'s nothing amazing or worth sending a thousand emails of recommendation over, but it\'s still something. Shearmur does try to take horror\'s traditional dissonance and atonality to the next level, while introducing ideas of rites and ceremonies, but we\'re still in the swamps of "been there, done that". The album production should receive more accolades than the score writing itself.