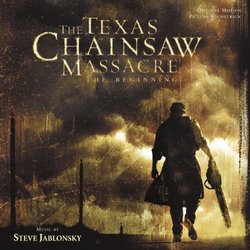 The Texas Chainsaw Massacre: The Beginning

Reviews of Jablonsky\'s first dabbling in the horror genre for The Texas Chainsaw Massacre remake varied greatly. They seem to be based on the reviewer\'s patience and ability to listen to the album enough to become familiar with what Jablonsky was trying to do. This is because it, as is common with the horror genre, is a difficult listen. Surpassing the absent soundscape from the 1974 film, Jablonsky did develop a couple of themes that appear a few times in his rhythmic, atmospheric, and tense score. For the prequel, his Chainsaw theme returns, but the other does not, as it was for characters who are, sadly, no longer with us nor part of The Texas Chainsaw Massacre: The Beginning.

"Main Title" sets the tone with a dark sound and heavy, rhythmic percussion. While a good amount of the score is quieter, yet tense, underscore, there are a number of occasions where the music will suddenly explode and give the listener a scare ("Birth"). We get our first reprise of the Chainsaw theme in "Chainsaw". It is performed in the low strings over a pulsing percussion beat. While the theme is not as notable as Charlie Clouser\'s Saw theme, it works better because it characterizes the Chainsaw killer in its dark and pounding tone without necessarily alerting the viewer to the character\'s presence.

"Attempted Rescue" changes the tempo a bit as the album\'s first action cue, though we are not talking The Island action. Action cues in this genre remain dark and percussive, but with more of the latter. This cue also contains some rhythmic violin work over pulsating cellos and creepy electronics. One sound effect that helps create this chilling effect is a breathing sound, heard at the beginning of "Chrissie Finds Eric". I found it creepy even outside the context of the film. The Chainsaw theme makes a strong return at the end of this cue. The end begins with "Dinner", a drawn out cue that starts to pick up the pace and moves into the action cue "Meat Factory". "Dean\'s Death" charges to a close with racing strings and "Epilogue" quiets with a final statement of the Chainsaw theme, who we all know has to survive, as this is a prequel.

This series is not one Jablonsky will be famous for, but that can be the nature of horror films. His score is perfect for the tone and setting of the film franchise and a more themaic or lighter approach would not have worked so well. On the other hand, another result of the nature of the genre, this album is not the easiest listen. Fans of dark, electronic score or those who feel like a challenge should look into it. If you can find the time to sit down and give it a few listens, you might be surprised. For the record, however, I prefer Jablonsky\'s work in other genres.