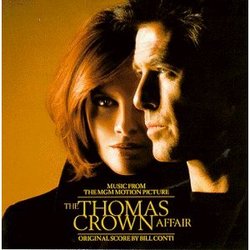 I have to say that one the few films this summer that lived up to at least some of it's surrounding hype is The Thomas Crown Affair. Based loosely upon the original 1968 version starring Steve McQueen and Faye Dunaway, this version stars current James Bond, Pierce Brosnan, and veteran actress, Rene Russo. This story revolves around very public art theft rather than a daylight bank robbery, and the pursuer, Russo, is a more plausible role as an insurance investigator rather than a typical private investigator. Director John McTiernan, fresh off his long stint on The 13th Warrior, provides a well-paced and nicely photographed film, bringing life to the minimal seven main filming locations. The ending sequence of the film in the museum not only is refreshing, but, as the music comes into play, best accompanied bits of filmmaking in recent time.

Long time film composer Bill Conti, whose credits include the Academy Award winning score to Rocky as well as one of my all time favorites, The Right Stuff, dusts of his baton and manuscript paper to lay down a fitting contemporary score. This is Conti's return to feature film scoring after a large gap in time, which included work as musical director for the Oscars and composer for IMAX films and numerous television projects. It was a shock to the film music community when he was chosen to work on this film, with members of the Internet community wondering what kind of rabbit he'd pull out for this film, and it's causing discussion and debate to this day.

I enjoyed the film, and it was the first film of the summer that I made a beeline to the music store to find out if the CD was in shelves. Unfortunately, it was delayed about four weeks after the release date of the film, but it's worth every bit of that time. As most score/song compilation CDs go, ARK21 follows the plan of choice by providing the four songs, ranging from Sting's cover of "Windmills Of Your Mind" (written for the original 1968 version) to the previously mentioned museum piece, "Sinnerman", performed by Nina Simone, and eight rather short score cues.

For the worrisome, the main title cue is titled "Black & White x 5" on the CD and uniquely uses five pianos to introduce the main theme overlapped with four providing rhythm and the fifth containing the actual melody. I was reminded of Dave Grusin's work on The Firm as well as James Horner's Sneakers score, a simple rolling piano melody backed with an uplifting orchestra accompaniment. The theme is a pure American construct, something that would not fit a film if it was set in Paris, London, or elsewhere overseas, an indescribable feel that says "capitalist nation." Not to say the other score cues are in the same vein, "Meet Ms. Banning" and "Goodnight / Breaking & Entering" stick with the American feel by executing classic and fusion jazz type melodies and arrangements.

Once again, the main theme re-appears in "The Glider" sequence cues, filled out by a string and woodwind section, still lead by the piano. It is one of those themes that I believe will live beyond the film, it definitely identifies it, and is a nice change of pace from most themes associated with edgy dramas and action packed films of recent memory. For all the detractors of the film, and its music, I would say that only one person beyond Dave Grusin and Mark Isham could effectively intertwine believable jazz arrangements into contemporary film scoring, and that would be Conti. It would behoove many composers in Hollywood when faced with thematic situation like in The Thomas Crown Affair to visit jazz instead of electronica and pastoral folk when trying to "set" a film. Fans and the film going audiences are receptive to it, so please feel free to explore it.

I would recommend this album to even the casual listener, it will maintain a life outside the film, a real feat for many film scores and non-songtrack releases. My only minor complaints would be the short selection of score cues and the rather abrupt ending track which ends the album with a real thud when not sequenced in the order it appeared in the film. Along with South Park: Bigger Longer & Uncut and The 13th Warrior, we would like to see this be nominated for the Academy Awards, but most likely it will be overlooked due to a lack of "blockbuster" performance at the box office.