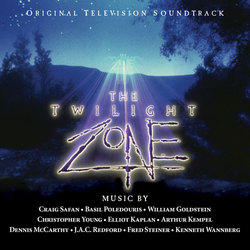 Submitted for your approval, Intrada presents 22 scores from these first two seasons of the mid '80s revival of The Twilight Zone. Featuring an array of talented composers, the scores are bound together by the composers' willingness to chart that middle ground between light and shadow, between science and superstition—a "dimension of sound" that could only have emerged from The Twilight Zone.

In conjunction with keyboardist and longtime Dead-associate Merl Saunders, the Grateful Dead collaborated on the main title, which conjures a uniquely creepy vibe, while incorporating Constant's iconic motif. Additionally, the following episodes are included, moving from purely orchestral to entirely electronic, sporting a myriad of styles reflecting the range of colorful story lines.