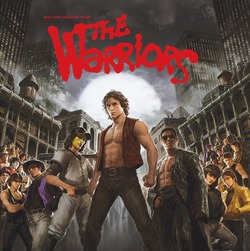 Waxwork Records is excited to announce their long awaited release of The Warriors. This deluxe double LP is three years in the making and features the re-mastered 1979 original soundtrack, in addition to, the vinyl debut of the complete film score by Barry DeVorzon.

Waxwork tirelessly worked directly from the original master tapes of both the original 1979 soundtrack and film score to bring audiences a brand new transfer of every musical cue heard in the movie, for the very first time on vinyl.