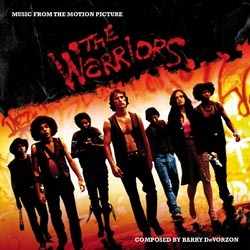 La-La Land Records, Universal Music and Paramount Pictures are proud to announce the expanded soundtrack release to the cult classic The Warriors. This release features a fully remastered soundtrack of the original LP presentation along with the score Barry De Vorzon initially wrote and recorded back in 1979.

For score aficionados this release is especially exciting since it contains music that was recorded for the film, but was ultimately cut out in favor of rock songs. Like the film, De Vorzon's theme-heavy synth rock score inspired a generation of filmmakers and musicians in the 1980's (including John Carpenter, Harold Faltermeyer, and Hans Zimmer). It's dark, vibrant fantastic late 70's/early 80's experimental film scoring at its finest.

We consider this release one of the most important in our catalog of nearly 300 releases. It's not to be missed, sucka!