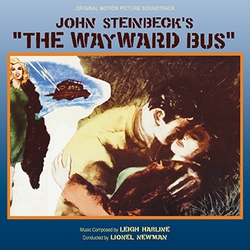 The Wayward Bus / The Enemy Below

The Wayward Bus and The Enemy Below, while polar opposites as films, did share something vital between them – two very different but superb musical scores by Leigh Harline.

Harline's score for The Wayward Bus is filled with the longing and yearning of its characters. You can feel it immediately in the film's main title music, and it continues in each successive cue – it really gets under the skin of the characters and drama, and it's filled with plaintive melodies and colors. The music for The Enemy Below is thrilling and memorable. Harline's scoring choices are interesting – he lets long dialogue sequences play without music, while scoring the action sequences, with his themes clearly defining the American and German boats and their maneuvers. Once the climactic battle begins, Harline lets his music go pretty much non-stop, and it's simply exhilarating battle music, the kind no one seems to know how to write anymore.

This is the world premiere release of The Wayward Bus, in stereo and sounding wonderful, thanks to the usual tender loving care of Nick Redman's team. We present the complete score as it appears in the film. The Enemy Below was previously released on Intrada (as a standalone score, which quickly sold out). We've remastered it for this release, presenting every note of Harline's score, but omitting the bonus tracks from the Intrada CD, which consisted of a few German drinking songs and some radar blips.

The Wayward Bus / The Enemy Below is limited to 1000 copies only.