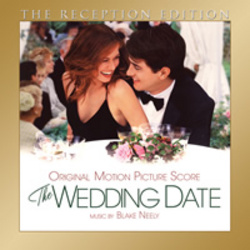 The Wedding Date: The Reception Edition

The Wedding Date was Blake Neely's first solo feature film assignment as composer. Previously released on compact disc at the time of the film's release as a limited edition which swiftly sold out, the film's musical score has remained popular in the public eye , considering how often composer Blake Neely has received requests for its return over the years. Expertly performed by the acclaimed Northwest Sinfonia Orchestra, the score finds the perfect pitch between laughs and love, mixing a frothy musical concoction in the vein of Georges Delerue for this delightful romantic comedy. The Wedding Date's main theme is a thoroughly engaging piece of music with a great melodic hook, and it grows and develops as Kat and Nick realize their affection for one another.

The Wedding Date returns to compact disc with this Reception Edition from BUYSOUNDTRAX Records, expanding the previous recording with three previously unreleased tracks that were not used in the film and two of the composer's demo recordings that were submitted to the film's producers in the early stage of finding the right musical tone for the movie.

In addition, we have added new recordings of three of the songs that appeared on the soundtrack—"Breathless," a 2000 hit for Irish pop group The Coors (heard during the second-half of the main titles, as Kat races to the airport), Michael Bublé's 2005 hit "Home" (heard during the end titles), and the 1963 Chiffon's hit, "One Fine Day," written by husband-and-wife songwriting team, Gerry Goffin and Carole King (played during the baseball game scene). These new versions have been arranged and produced by noted multimedia composer, orchestrator and arranger, Dominik Hauser.