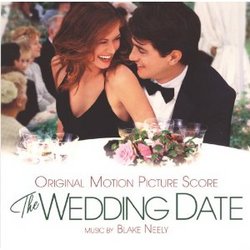 Ah for the days when score albums really stirred the blood. Does it seem to you that recently we have been hearing an awful lot of good, but not quite great, scores – scores with so much possibility, dramatically and musically, that for some reason fail to deliver on that promise? Lately, I\'ve found it hard to be surprised or really excited by a new score, even by some issued by the stalwarts of the industry. This is not to say that scores have been uniformly bad, just that they do nothing more than perform their job. They don\'t seem to reach beyond what the film they accompany requires.

A case in point is Blake Neely\'s score to the romantic comedy The Wedding Date. This score marks Neely\'s first full album release, although he has been working steadily for the past few years on projects such as Frequency and the television show "Everwood". The Wedding Date appeared (and quickly disappeared) from theaters early this year without a score release. I\'m glad that BSX Records pulled this score from certain oblivion if for no other reason than it gives exposure to a lesser-known composer who has potential. Unfortunately, as I intimated above, this particular score does not realize that potential fully.

The Wedding Date is a typical romantic comedy and the music proclaims that from the opening bars of the first cue "Invitation to a Wedding." The instrumentation is mainly high strings, woodwinds, and keyboards, and the texture is light and transparent. After about a minute, the melody segues into pizzicato strings and the texture becomes mischievous, hinting at the troubles that will keep the lovers apart. The melody continues to move through differing textures until, about three minutes in, it moves to the oboe in a truly lovely statement that would have been a new twist on this predictable progression. Alas, it quickly returns to the opening of the cue, complete with orchestral and percussion swells and a drum beat before a modulation up a key. Like I said at the beginning, nothing wrong with what happens here, it is just very ordinary.

The score does feature many beautiful moments, especially in the score\'s emotional crux, "It\'s Complicated." At the cue\'s beginning, the texture thins to simple keyboard chords and underscoring. It is an effective choice, and when the oboe enters the result is very lovely. But halfway in, the main theme returns for half and minute and breaks the mood just established. The cue then turns to standard issue, lush, romantic comedy scoring.

But in all this, don\'t forget that I mentioned the potential in this score. Take a listen to the last cue, "Willy Wide Wonder." This is a jazzy, hip cue complete with Hammond organ and jazz flute. Yes, it is straight out of the 70s. Yes, it is a little incongruous with most of the rest of the score. But imagine if this light, irreverent approach had been taken with the entire score. The result would have even been a different movie.

I know that many composers are handicapped by the director\'s vision and I know that Mr. Neely has real talent. I\'m thankful to BSX Records for putting out this score as I think it will put Neely on many more radars. I know that I\'m going to watch with interest what he does next. And for right now, I\'m content with looking to see what else might be coming to surprise and excite me.