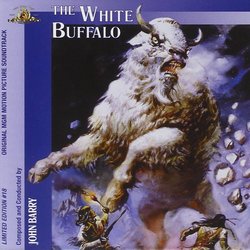 John Barry fans and completists rejoice: the composer's score for director J. Lee Thompson's White Buffalo has finally been released, almost thirty years after its composition. White Buffalo, which starred Charles Bronson as Wild Bill Hickok, was in many ways a Western version of Moby Dick. After the titular buffalo visits him in a dream, Hickok feverishly begins to hunt it throughout the Western United States, ultimately joined in his quest by a young Crazy Horse. The hauntingly open and empty landscape becomes a perfect metaphor in this intense character study, a metaphor Barry continued in his score by matching note for note the picture's sense of desolation and desperation.

For those with a casual interest in Barry's oeuvre, White Buffalo offers many intriguing precedents for his Oscar-winning score Dances with Wolves. The lush string writing and plaintive call of French horns, in abundance in Dances with Wolves, are used to similar effect for White Buffalo. Yet the earlier score has a darkness that permeates every cue. Instead of the vast sweep of Wolves, Buffalo offers a personal vision of one man's maddeningly direct focus. The "Main Title" opens with a low rumble in the bass strings. As the string color begins to rise with the addition of cellos, tightly dissonant clusters are formed, moving in, out, and through one another. This gradual move up the orchestra continues as trumpets are added, pulsating with a relentless one-two-three as the chimes give way to drum hits. By the time the violins enter with the main quartal motive, the dissonant clusters resemble nothing so much as Ligeti texture music. Although the orchestration retreats into the lower reaches before climbing again to the climax, the tension is not released throughout the entire four minute cue.  It is a magnificent piece of psychological scoring and easily the best cue on the score.

Unfortunately, you have to strain in order to hear the nuances this cue has to offer. White Buffalo was produced using the best source material Prometheus could find, but unfortunately the best they could find were not the masters. The monophonic result is a fuzzy sound with several strange sounds appearing in the background. For instance, the cue "Up French Creek/Bein' Afraid" has some interesting percussion writing and effects with the use of pitched percussion instruments, but it as though you hear those sounds through earmuffs.

Add to the score's production problems the fact that the relatively small amount of musical does not hold up under sustained listening and you have the perfect recipe for a release with plenty of historical interest but little commercial appeal. John Barry's work is always well-made and perfectly suited to the project, but in this case loses a bit too much apart from the film. It has lovely moments, as indicated above, and if you are a John Barry fan I would recommend it, but if not, consider this release an invitation to reconsider his other, greater, scores.