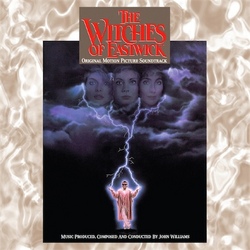 The Witches of Eastwick (Remastered)

Perseverance Records is proud to announce the reissue of the soundtrack to Witches Of Eastwick by the legendary John Williams. As with all of our reissues from the Warner/Elektra/Atlantic vaults, it's a straight up reissue of the original LP—remastered.

With Witches Of Eastwick John Williams created a change of pace from what he became known for. It was a playful, wonderful and brilliant score for a comedy film. When you watch the film, even Jack Nicholson whistles his own theme! The score was nominated for an Academy Award. If you missed out on the Collector's Choice reissue from a few years back, we are offering it with new artwork and remastered sound.

As with all of our Warner reissues, they handed us a quality master. It does not have that error the Collector's Choice reissue was plagued with. Liner notes by Randall Larson. This is a straight reissue using the track listing from the original LP and Collectors Choice reissue. We used the movie key art and updated the CCR art. In our opinion, this is a much better looking package that uses photos from the movie (licensed from WB).