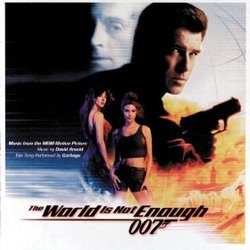 The World Is Not Enough

Review: World Is Not Enough, The

David Arnold, having proven himself capable of scoring a James Bond film with Tomorrow Never Dies now finds his own voice for the film series in The World Is Not Enough, the 19th James Bond film. Whereas TND was a very large, modern tribute to John Barry's Bond scores, the music on the TWINE soundtrack is much more different, and can be placed in a style halfway between John Barry and a techno score. It should be noted that this is not exactly how the score comes across in the film - there is a lot of music not presented on this album!

But what can one honestly say about The World Is Not Enough? Well, the album starts out with the main title song - the first Bond song in over 12 years that actually carries the theme throughout the film score. That is why Arnold's "Surrender" on TND was a superior song to Sheryl Crow's main title song - not only did it capture the Bond "feeling", but we were exposed to the theme (and variations thereof) throughout the entire film. The same holds true here. The band Garbage (who I thought totally wrong for a Bond song) pulls it off with amazing abilities, and the orchestration on the song is nothing short of perfection.

The score starts out with a rather large action cue - during which we are not only exposed to Arnold's approach to scoring Bond (more synth and percussion than before), but also a few new action themes - with the traditional Bond themes sprinkled throughout. There really aren't a lot of the older themes on this album - but they do appear in the film. Amidst the action cues, there are the calmer, more reflective cues. "Access Denied" is one such cue, as is "Elektra's Theme". The main melody in "Ice Bandits" seems to be a slight homage to Marvin Hamlisch's score to The Spy Who Loved Me (well, during the ski-chase, at least!). In a cue not heard in the film, we hear a solo vocalist used to ethnic effect in "Welcome To Baku".

All of the cues are more or less enjoyable, but there is one problem with this score - there is too much underscore. Whereas the older Bond films (and older films in general) tended to be scored by major thematic material, Arnold has chosen the more conventional route of accentuating virtually every action that happens on screen. This has the unfortunate side effect in that just when a theme gets going, it changes to match some other action on screen. So while there are plenty of themes to go around, none of them seem to really get going to have a real climax - and that's the problem with the album. There is no real "climax" cue. I would assume it to be "Submarine", since it's the last action cue on the album, but it's full of so much incidental underscore that it's rather hard to feel a sense of satisfaction. Of course, during the film itself, we get the main themes plenty of times, but they don't appear on the album.

Additionally, the final song on the album, "Only Myself To Blame" is not a big blasting "Bond" song that one would hope for at the end of a Bond album. Rather, it is a slow lounge-type song that just seems to end the soundtrack more of a down note - and the song doesn't even appear in the film once! Rather, there is a really cool rendition of the James Bond theme, mixed with the themes from this film, almost like a techno re-mix. I really did enjoy this album, though - it's just a shame that it didn't have a satiating finale. But as far as Bond scores go, this is definitely one I can be happy with.