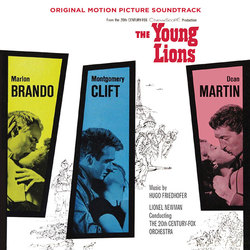 Intrada's latest release features Hugo Friedhofer's 1950s masterpiece from the 20th Century Fox film The Young Lions. Friedhofer's stunning main theme is a tightly wound and restless march, never resolving, merely transitioning to the sprightly, energetic ski scene that opens the movie, revealing one of Friedhofer's finest main titles. Friedhofer treats the romance of the film with both sensitive underscoring as well as source music. When Friedhofer's score meets the war itself, the composer does so, as Frank DeWald describes in this notes, "with stark, angular lines, strong dissonance and dark orchestral colors."

For this expanded edition of the original 1958 Decca soundtrack album, Intrada had access to all the mutli-track elements stored at 20th Century, preserved in vibrant stereo. This allowed Intrada to present many previously unreleased cues, including an alternate ending to the score. The score is presented in film order on CD 1, while CD2 presents the source music arranged and recorded for the film as well as a newly remastered presentation of the classic stereo Decca album.

Set during World War II, the film (based on Irwin Shaw's 1948 novel), uses the war as backdrop, focusing on three soldiers and their intertwined stories—two Americans and one German, their rugged experiences and the women in their lives. Directed by Edward Dmytrk, the film stars Marlon Brando as the German soldier going from idealistic enthusiasm to profound disillusionment. Montgomery Clift plays a down-on-his-luck Jewish kid from Brooklyn American solider number one, and Dean Martin plays reluctant draftee American solider number