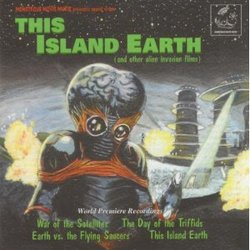 This Island Earth (and other invasion films)

Review: This Island Earth (and other invasion films)

The marvelous label Monstrous Movie Music returns in an all-out assault of cues from four fondly remembered science fiction films from the 1950\'s and 60\'s, each concerned with alien invasions from space. Conductor Masatoshi Mitsumoto leads The Radio Symphony Orchestra of Slovakia in powerhouse renditions of the music, which defined the sound of mid-20th Century "B" pictures, composed by legends such as Henry Mancini, Daniele Amfitheatrof and Ron Goodwin. Some of these films were even lucky enough to be skewered by the gang at "Mystery Science Theater 3000", the primary format in which most "B" pictures of this type can actually be enjoyed. In this era, most composers were often never credited onscreen for their work in these films and their cues tracked throughout many productions.

The album opens with the "Main Title" for 1958\'s War of the Satellites, a nervous, off-kilter march with chirpy xylophone and trumpet accents. The next twenty six tracks concern 1955\'s invasion offering The Island Earth, which has a more understated, mysterioso feeling in its "Main Title", through low pedal drone beneath a slowly descending melodic line on electric organ, then on woodwinds and trumpet. A brief, warm fanfare closes the track, when the story opens in the United States. "Jet West" continues the slice of Americana, fanfaric material, representing our unflappable hero/scientist/pilot, Cal. "From Unit 16" is the first lengthy track, with the melancholy, mysterious main theme heard on solo oboe, then variations in mid-range strings and woodwinds occur under a steady 2-note harp rhythm. "Interocitor Montage" is a brief bit of rhythmic business, while "Robot Plane" is dominated by eerie high strings, harp arpeggios and a lonely solo clarinet. Romantic and warm tones in the strings return in "Haven\'t We Met", when our hero/scientist/pilot meets his main squeeze for the duration of the movie, while the optimism continues into "Exeter\'s Mansion" with high range chimes and tremolo strings.

"Neutronic Rays" and "Conversion Tub" bring in the big brass and string exclamations, the latter including a discordant electric organ. A last, calm respite occurs in "Vermont Memories" before the danger returns and in "Shooting Stars" a new 3-note motif appears rising in intensity, representing the terrible fate of the alien planet Metaluna (and for MST3K fans, it can be sung to the lyric "Normal View!"). "Meteor Battle" begins unassumingly but wavering, slightly dissonant lines slowly rise, increasing the tension. Moody woodwind variations of the main theme are presented in "Metaluna Tunnel" and "Metaluna Transport". The murky textures are finally broken through by exciting staccato brass in both parts of "Metaluna Catastrophe" and optimistic tones briefly occur in "Flight From Metaluna" before ominous low range brass and woodwinds cut it short. "Amorous Mutant" is lurching, insistent cue with sharp brass accents for the scene of an advancing creature. "Down To Earth" features the bright, fanfaric material in its close, yet "End Title" is full of threatening, trilling flutes and strings and arcing brass before he orchestra finally swells to a warm, resounding crescendo.

The brief "Main Title" for Earth vs. The Flying Saucers follows and is really just trilling strings and woodwinds and rising brass chords. The remainder of the album focuses on music from 1962\'s Day of the Triffids, which also features a brassy, exclamatory "Main Title", with further interest provided through a choppy, rhythmic ostinato and shimmering, descending string and harp textures. "Greenhouse" is a somber, solemn cue, while "A Sight for Sore Eyes" is more hesitant in chimes, harp and strings. Wavering strings and mid-range flutes in an inquisitive setting feature in "Plane Crash" as softer strings float into both "Susan and Bettina" and "Turning on The Lights". The pace quickens in "Escape and Coker\'s Death" through steady timpani beat and strong brass chords and a nice change of tone occurs in "Spanish Square" with the requisite Latin flair.

Anticipatory, pounding timpani and brass start "Here Come The Triffids!", along with rising oboe and clarinet lines as contrast. "On To Cadiz" includes hesitatingly major mode strings, brass and flutes as "Triffid Attack" brings in the halting ostinato from the "Main Title" amid tumultuous woodwinds. The final track, "End of the Triffids", emerges slowly into a brief but victorious brass crescendo. This fine, faithful re-recording would be of most interest to fans of the films, the era and its melodramatic stylisms, but expect to find a more brooding, moody invasion rather than one of wild action.