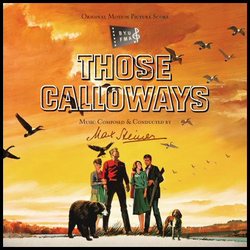 Produced by Walt Disney in 1965, Those Calloways is one of the producer's least-known live-action features and is also one of his most intriguing. Remarkably adult in both its writing and presentation, Those Calloways was an early cinematic look at conservation themes. It was also the last film released sporting a Max Steiner score. Steiner's score is lyrical and majestic, with many moments of humor, tenderness and danger. It is orchestrated by Max's longtime colleague Murray Cutter and brilliantly performed by the Walt Disney orchestra under Steiner's baton.

This CD presents the complete score as composed by Steiner, and the songs composed by Richard M. and Robert B. Sherman. It also presents, for the first time, the original cast performance of "Rhyme Around," featuring Paul Hartman, Ed Wynn, Brian Keith and Walter Brennan.

The score is presented in full stereo, mastered from the three-track magnetic recording sessions preserved by Disney Studios. In addition, we offer a demo recording of Max Steiner's song "Angel," preserved on acetate in the Steiner Collection at Brigham Young University. The album includes a 32 page book with notes by James V. D'Arc, Ray Faiola and a special introduction by Leonard Maltin. Disc mastering by Ray Faiola, Chelsea Rialto Studios. Package design by Jim Titus.