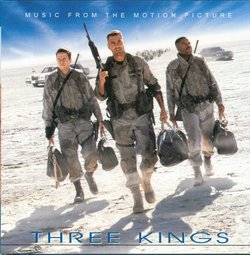 by David A. Koran November 20, 1999
4 / 5 Stars
Three Kings marks the third feature directed by David O. Russell whose past features include the oddball Spanking The Monkey and the strange mainstream feature Flirting With Disaster. The movie is about some privateering soldiers at the end of the Gulf War who go in search of a cache of stolen Kuwati gold in Iraqi held territory. Their plan seems simple enough, a day trip in fact, but all does not go to plan upon arriving in the town where the gold is hidden. Marketed as a comedy, the film ends up as a story of morals and a lesson in humanity, a real surprise for most of the unsuspecting audience lured into the theater. Carter Burwell, well known for his long time collaboration with the Coen brothers (Raising Arizona, Fargo, Barton Fink), gets the nod as composer for the film.

The release, a first for CD-Now and its licensee Warner Brothers, is a conglomeration of several songs and about 15 minutes of score. Most of these songs are from the trailer as well as the film, an unusual arrangement nowadays, since most trailer sources aren’t included. Burwell’s contribution centered mainly around taking traditional Iraqi and middle eastern musical arrangements and instrumentations and updating them with a more modern beat and sound. There isn’t a real central theme or melody that permeates the score, but it’s mainly paced by the rhythms contained in the music and instrumentation that sets the mood and atmosphere. The use of electric guitar in place of the more traditional stringed instruments helps add to the feel that the Gulf War was more involved as "technological warfare" than past conflicts. This is the first feature to actually tackle the subject of the Gulf War and does it with a bit more evenhandedness than one would expect from a Hollywood film that is more west-centric but actually puts a spin on to the story of those affected by the soldiers’ actions. It’s not an outstanding score (either in the film or presented on this CD release), but it serves the picture well - which a good score should, no matter the length.