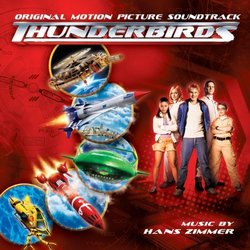 It's hard to take a television show like "Thunderbirds" too seriously. So it should come as no surprise that a live-action feature film version based on that show should not be taken too serious either. The basic premise of the film is that the Tracy family leads a double life - they're the Thunderbirds, an international rescue squad with high-tech spacecraft. The youngest brother in the family, Alan (Brady Corbet) wants desperately to fit in, but his dad Jeff Tracy (Bill Paxton) won't let him until he finishes school. But when the Thunderbirds fall into a trap set by The Hood (Ben Kingsley) who is set out on revenge, it's up to Alan to save them. The film is one for the kids - it's a fun family film. There's very little violence (although there are fights), and there's nothing offensive spoken on screen. Helping keep the mood light and fluffy is a score by Hans Zimmer.

The album starts off with a Zimmer-ized version of Barry Gray's classic "Thunderbirds" television theme. It accompanies the rather amusing animated opening title sequence, and helps set the fun tone of the film. Zimmer came up with a few new themes of his own as well. There's the heroic action theme ("International Rescue"), the dark villain theme ("The Hood"), the flighty Lady Penelope Theme ("Lady Penelope: At Your Service"), and the emotional "adult" theme ("You Need to Grow Up"). Some light and airy tinkering spatters the album (" Tracy Island", "Fafafa... No Way!") There is also a lot of electronic work in this score along with the orchestra - and that will probably be one of the dividing issues to most listeners. I found the electronics in the film to work really well, but on the album they get a little distracting. Nonetheless, big cues like "TB 3 Takeoff" and "Thunderize!" have a fun energy level to them.

Ramin Djawadi wrote quite a bit of additional music (along with James Dooley and Mel Wesson), and as seems to be the case with most of Zimmer's collaborative works, the seamlessness of it makes it all sound like it's one person doing it all. But that being said, this is definitely a Zimmer score. All of the themes (including Gray's original theme) get a nice wrap-up in "F.A.B." before the album closes with the obligatory pop song "Thunderbirds Are Go!" by Busted. In the end, the album is one that you'll probably pick-and-choose certain cues to listen to - and it's up to you to decide if you like Zimmer's music enough to spend your money on this one.