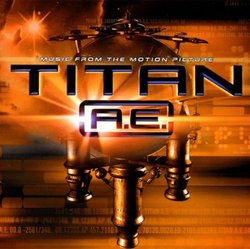 It's a thousand years from now. The Earth has been destroyed by a hostile alien race known as the Drej. During the evacuation of the planet, five-year-old Cale Tucker was separated from his father, whom he hasn't seen since. In a universe where humans are second-class citizens of the galaxy, he's had fifteen years to become angry and bitter. Titan A.E. tells the story of how Cale discovers he's the key to humanity's future. His father genetically encoded a map in the palm of Cale's hand that shows the way to the Titan, a massive spaceship that is the human race's last hope for survival. On his journey, Cale will have to overcome the ever-menacing Drej, betrayal, and his own anger.

Titan A.E. is most remarkable for it's use of computer animation alongside traditional cell animation, which produced some truly remarkable and beautiful visuals. Granted, there were plot holes big enough to fly a starship through, and most critics did find the movie a touch formulaic. (Personally, I'm of the opinion that everything written in the last four thousand years of civilization is formulaic to one extent or another, but that's another matter for another time.) Overall, though, it was a fun ride, and fun seems to be what the makers of the movie intended.

The soundtrack certainly is fun. A compilation of songs by just-east-of-mainstream artists such as Lit and The Urge is unexpected for a space opera, but it works. Believing that this "acoustic" thing is just a fad, these artists go in with guitars blazing, and their high-powered compositions complement the movie's several actions scenes perfectly. In fact, the music weds with the story better that most any other film I've seen. Electrasy's "Cosmic Castaway" plays over scenes of Cale working at a space dock, struggling to get by among aliens who don't exactly respect him. The Urge's "It's My Turn to Fly," plays as Cale gets to fly a starship for the first time. This was one of the few movies I've seen where the pop songs picked actually work in the film, and progress the plot.

Listening to the CD, I also got the sense that none of these artists were taking themselves very seriously, and as a result, a lot of the angst that weighs down much of the post-modern gen-x music scene isn't there, which in my opinion is a good thing. Like I said, it's fun. It's offbeat. It's different. Different is good. "Karma Slave," by Splashdown is my personal favorite simply because they sing in Sanskrit. Fun, however is a two-edged sword. I have to admit that I was put off by the cheese factor of some of the songs at first, but the effect diminishes over time. Also, there were occasions where I missed the swelling strings and heroic brass of other space-borne adventures, but sometimes a change of pace is a good thing.

The music contained on this soundtrack isn't the kind of music I normally listen to, and I don't think I would have ever bought the CD if I had just seen it in the store, but to my surprise, I found myself wanting to listen to more than a few of the songs again. They're out of the ordinary. They're catchy, and—what is today's secret word?—they're fun. So if you're tired of listening to whiney gen-x bands, especially of you usually like those kinds of bands, you'd be a better person for adding this CD to your collection.