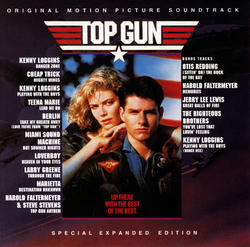 Between Footloose and Top Gun, Kenny Loggins had the fortune of being probably the best known songwriter/singer featured on two of the best pop albums of the 1980s. Recently, Columbia Legacy re-issued the soundtrack to Top Gun as a "Special Expanded Edition" and included five previously unreleased tracks.

The classic songs are there - "Danger Zone" (by Loggins), "Take My Breath Away" (Berlin), "Heaven in Your Eyes" (Loverboy), and others. Of course the "Top Gun Anthem", composed by Harold Faltermeyer and Steve Stevens, makes it's appearance. The bonus tracks include "Sitting on the Dock of the Bay" (Otis Redding), the Jerry Lee Lewis version of "Great Balls of Fire" (no Anthony Edwards track for you fans!), and a dance mix of "Playing with the Boys" (Loggins). Interestingly enough, there is a bonus track of the Righteous Brothers' classic, "You've Lost That Loving Feeling" - which means that it never appeared on the original album, which surprises me.

We are also treated to an additional score cue by Faltermeyer, "Memories" which takes advantage of a very calm, sad acoustic guitar with a theme (which if played by a lone violin) would drive one to tears. While it's a great cue, I wish that Columbia had put some more score on this album, as it has never been released - and this would be a great opportunity to do so.

However, for those of us who never had a chance to get the original album (which is probably still available), it's nice to know that this expanded one fills in a few of the gaps - even though it still has some things missing. If you don't have this one, you're missing out on a classic 80's soundtrack.