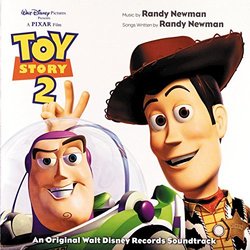 by David Koran November 20, 1999
4.5 / 5 Stars
From Pixar’s composer laureate, Randy Newman, comes the next installment of the Toy Story series, entitled, believe it or not, Toy Story 2. The album is prefaced with three vocal arrangements, \"Woody’s Roundup,\" \"When She Loved Me,\" and the return of \"You’ve Got A Friend In Me.\" Although performed by other artists, Riders in the Sky, Sarah McLachlan, and Robert Goulet, each was also written by Randy Newman, scoring the hat trick when it comes to composing for film. The songs are okay, and are better when taken in the context of the film, and re-praising \"You’ve Got A Friend In Me\" is out given it’s previous inclusion in the first film.

The rest of the score is not a rehash of what was presented for the original Toy Story, but is an extension with liberal references to the original themes, orchestration and instrumentation. The story, if you haven’t seen the film, is that the despicable owner of Al’s Toy Barn recognizes Woody as a rare collectable doll which he hopes to use to complete his \"set\" to sell to a museum in Japan. This time, the tables are slightly turned from the first movie where Buz Lightyear (along with several returning members of the toy cast) is tasked with retrieving Woody from Al and all the adventures in between. Partaking in some of the great sci-fi references throughout the film, and remembering the marketing blitz of film of not so long ago, the storyline is excellent. This is one of the few films, if not the only one of the year that has lived up to the critics lauding \"this sequel is better than the original.\" With all the great sci-fi references, one of the best ones used in the film is the musical reference that required its own \"disclaimer\" credit at the end of the film, and had me rolling in my seat in laughter (unfortunately the mixed audience who I saw it with didn’t seem to get it, or Luxo Jr. for that matter). It is an overall fun film, a lot of gags for adults, and most likely just a nice story for the \"young-ins\" and is definitely worth a first and second trip to the theater.

Randy Newman’s score for the film keeps in tradition to both his previous work on Pixar features as well as still paying homage to the animation scoring greats as Stalling and Bradley. There is the typical \"mickey mousing\" of the music during the appropriate scenes such as the characters creeping around and playing around in pure theatrics. Since this is really somewhat Buz centric, you do get some dashes of his flying/hero theme, and also since he’s, in a way, doubled, you get twice the music. There are a few passages that are new to add coverage for Stinky Pete the Prospector and Jessie the Cowgirl in Al’s apartment, but aren’t as easily recognizable, even with blatant track titling. Overall it’s a nice album, and is more than adequate for the film, but pre/sequels of this year have let me down a bit and unfortunately it’s not as wowingly amazing as one would hope, but still better than the other entries in that realm. If you liked the first Toy Story and are a fan of animation from classic Warner Brothers’ films, you’ll sure to get a kick out of this.