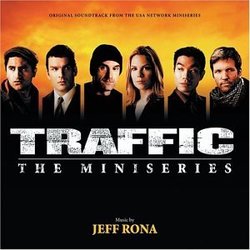 Varese Sarabande Records produced a lengthy album for Jeff Rona's ethnically-influenced score to the mini-series spin-off from the Steven Soderbergh film, Traffic. The album, over 70 minutes long, drags a bit between periods of thematic development or solo performances with the score primarily comprised of ambient electronics with light percussion, and occasional vocal and duduk or woodwind solos. The percussion helps move the music along, which would have been very drawn out otherwise.

Rona presents the main theme in the first cue, "Traffic", which is performed by soprano Lisbeth Scott (The Passion of the Christ, Shrek). The theme is not used extensively, appearing briefly in "Journey," "Adam in America" and "Run Like Hell". Other cues consist of pulsing underscore. The music that accompanies the faster paced scenes in the mini-series tends to be electronic, as heard in "Foot Chase" and "City Escape". The mix of electronics, percussion, and ethnic instrumentation clearly follows Hans Zimmer's approach to Black Hawk Down, which Rona contributed additional music for. The highlight of the album is "Top of the Mountain" which extends the theme and Lisbeth Scott's performance as heard in the opening cue. This album is a solid effort to blend ethnic and modern sounds and accompanied the multiple settings of the series well, but could have benefited by not including some of the more ambient cues.