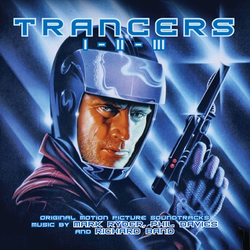 One of the most iconic films in the Empire catalog is the 1984 film Trancers, which became a cult hit and launched a series of sequels. Setting the series' noir tone was its sleek, exciting synth score by composers Mark Ryder and Phil Davies. Overseen by Empire house composer Richard Band, Trancers' memorable themes became the calling card of Jack Deth during his first adventures.

The music is as moody as the '40s film noir, black-and-white pictures that inspired Deth's character, yet as colorfully modern as Trancers' time-warped detective. Given the throwback tone of a high-tech future meeting the retro present, Trancers seemingly begged for an electronic musical approach, a sound quite different from the mainly orchestral scores that Band had done previously for the studio. The score would be in tune with Vangelis' approach to Blade Runner, as well as the new-wave and rock aesthetic of such synth composers as Tangerine Dream and Giorgio Moroder. A classic noir score invariably employs a jazz sound, a sultry sax supporting the femme fatale as darker strings establish the no-nonsense hero. However, the composers took the approach of a moody homage rather than electronically replicating that kind of iconic instrumentation.

To premiere the scores for the first three Trancers films on this 2-CD set, Intrada used the 1/2" four-track scoring session tapes which contained the finalized two-channel stereo mixes.