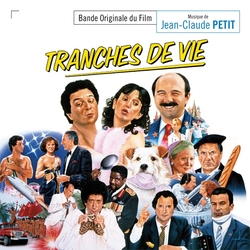 Music Box Records is pleased to present for the first time on CD the original motion picture soundtrack of François Leterrier's Tranches de vie composed and conducted by Jean-Claude Petit.

The movie allowed Jean-Claude Petit to try out very different musical genres and paint with the many colours of his orchestral palette. He composed a rich and varied score, dominated by a main theme developed in many different versions throughout the movie.

This present edition has been fully remastered from the recording session tapes which contain the previously issued LP program and never-before-released tracks. The package includes an 8-page booklet with liner notes by Sylvain Pfeffer, discussing the film and the score based on a new interview with Jean-Claude Petit.