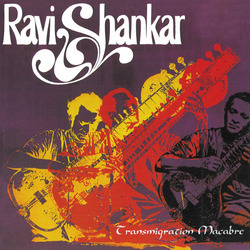 Ravi Shankar composed Transmigration Macabre for the British art film Viola (1967). The film tells of the growth of a possessed man's belief that his dead wife has returned to life in the form of a cat that pursues him. The music traces his emotional turmoil, struggles, and eventual victory against the dominating influence of his wife after her death.

Transmigration Macabre has been unavailable for many years and has not been released in the U.S. until now.