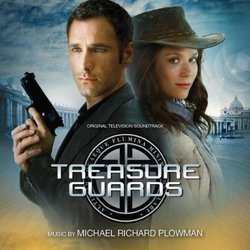 Composer Michael Richard Plowman has really made an impressive break-through in 2011 with his two feature film scores Age of Heroes and A Lonely Place to Die, both released on CD by MovieScore Media.

We are excited to work with Michael for the third time this year, offering you his truly exciting action adventure Treasure Guards. The big, orchestral score (which also incorporates substantial choral writing, ethnic colours and adrenaline-pumping rhythm programming) is written for a story about "treasure guards" working for a covert organization based in the Vatican and a race to secure the ancient Seal of Solomon.

The German television movie stars Anna Friel and Raoul Bova and Michael Richard Plowman's feature film approach to the movie results in a lot of musical excitement with an epic main theme, an exquisite Barry-esque love theme and a lot of propulsive action music.