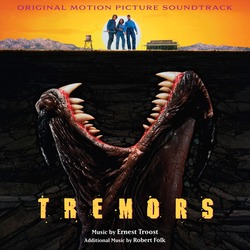 Composers Troost and Folk unleash a wildly playful and thrilling musical assault, weaving orchestra, blues and synth into an irresistible soundscape of scares, chills, action, heart and even Americana to propel this tale of a courageous band of dusty locals forced to defend themselves against an onslaught of deadly subterranean creatures. The score, much like the film, itself is "Perfection."

Produced and mastered by Mike Matessino, the work of Ernest Troost is presented on Disc 1, while Robert Folk's music is showcased on Disc 2. The exclusive, in-depth liner notes are by writer Zach Tow, including new comments from the composers and a note from director Ron Underwood. The rollicking art design is by Dan Goldwasser.