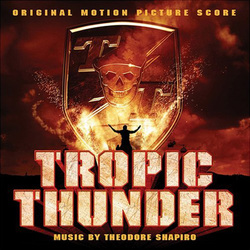 Let me first say, Tropic Thunder\'s score is golden. It ranks up there with Djawadi\'s Iron Man, Marianelli\'s Atonement, and Jablonsky\'s Transformers in terms of most listening satisfaction to me. Theodore Shapiro has welded a broad symphonic pallet with the likes of guitar and heavy percussion along with a choice of ethnic instruments, something I find exceptionally pleasing to my ears.

What I find enjoyable right off the mark with Shapiro\'s score is the rhythms. They got my foot tapping, and once that started it was only natural for me to pay more attention to what I was hearing instead of glazing over, which sadly has happened in the past. Each track has its engaging moments. Even taking the short track, \"Enter the Dragons\" has its moments of mixing traditional with ethnic and drawing you in, all done in 58 seconds flat mind you. Of course this track may come off as sounding a little cliche for the Far East, but I think that\'s the idea, after all Tropic Thunder is a comedy.

As with anything done as a cliche, I feel it should be done well but also rise above it to make it new. Shapiro does this well I feel, and almost makes me want to try and replicate it in my own works.

One thing I have noticed with Tropic Thunder\'s score is it feels like it\'s pulling from many different scores to come out this year, namely Iron Man, and Wanted. I get this impression because of the combinations of instruments and style used within the over all score. Again it\'s orchestral but also rock band-ish. Could this possibly be a trend among the top composers in Hollywood? I don\'t think its unheard of, people follow trends and this would be no different for composers.

With everything mentioned before hand, now it\'s time to crack off into some tracks that I think deserve some mentioning.

Right off the bat Shaprio sets the stage aurally for the movie-within-a-movie with the track, \"You\'re My Brother\". The track comes off sounding like the center-piece of an epic action film, which is exactly what it\'s meant to convey. It\'s a great track to start the album up with as it sets the stage for some riotous butt-kicking orchestrally. Now this album isn\'t all butt-kicking thus it doesn\'t sound completely like Iron Man but it has enough guitar and kit drums to get your head banging.

Towards the end of the piece though it gets a little more dramatic with moving strings and a beautiful solo flute trailing off as the piece comes to an end. It\'s one of the better tracks and hold it\'s own through out the remainder of the album as one of the repeat tracks, a track you put on repeat because it\'s just so good.

In comparison to \"You\'re My Brother\" comes \"Don\'t Judge Me\", a more rock driven piece. Fast drums, thumping bass line, gnarly guitar, a total pulse quickener. One of the jamming, bang for your buck pieces. The only cliche piece I\'ve found through out the album that was more cliche than not was \"Truck Escape\". Maybe it\'s me but is there really any way of writing music for a vehicle escape other than with a cliche.

The last two pieces are just wonderful scoring by Shapiro and awesome performing by The Hollywood Studio Symphony. \"Satan\'s Alley\" would seem like it would be filled with drums and guitar and just a total rock out, but instead is a beautifully orchestrated piece of music that sequels into \"Cue Bill Conti\" with a possibly allusion to Conti\'s scoring of the Academy Awards shows. Which has to be the funniest composer joke I\'ve listened to in a while.

All in all Shapiro\'s score for Tropic Thunder is off the chain, a must buy, you owe it to yourself the pleasure of hearing a strangely serious score in an action comedy that stands apart from the movie as a whole and is worth every effort Shapiro put into it, be it with music jokes or parodies of other genres. The score is a mixture of fun, seriousness, rock n\' roll and great scoring.