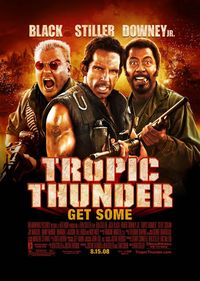 In Zoolander, Ben Stiller tackled the fashion industry with his satirical take on male modeling. Now he turns his sights on Hollywood and war films, with the biting satire, Tropic Thunder. When three of Hollywood\'s biggest actors come together to film the "true story" of Vietnam veteran "Fourleaf" Tayback\'s (Nick Nolte) heroic escape from a POW camp, everything goes wrong. Action star Tugg Speedman (Ben Stiller) is banking on the film to jumpstart his floundering career after a misguided attempt at drama (playing a retarded man in Simple Jack) nearly bankrupted his reputation. Comedy star Jeff Portnoy (Jack Black), best known for his flatuence-inspired comedy film series The Fatties, is dealing with a major drug problem. Five-time Oscar-winning Australian actor Kirk Lazarus (Robert Downey Jr.) is such a method actor that he undergoes a controversial skin pigmentation procedure to play a black man. And rapper Alpa Chino (Brandon T. Jackson) feels compelled to plug his line of "Booty Sweat" energy drinks during the filming. When a $4 million explosion accidentally goes off, ruining a take, director Damien Cockburn (Steve Coogan) needs to do something drastic to get his actors in line - or else studio executive Lee Grossman (Tom Cruise) will shut down the production. After consulting with "Fourleaf", Cockburn decides to immerse his actors in the jungle, which has been rigged with explosives, and use hidden cameras to film their true reactions. Unfortunately, they were dropped into the middle of the "Golden Triangle", run by the Flaming Dragon gang, who believes the actors are actually DEA agents set to destroy their heroin operation. As they move through the jungle, Speedman is convinced that the obstacles they\'re encountering are actually part of the film, but Lazarus and the others are quickly convinced that something has gone terribly wrong. When Speedman breaks off from the group and is captured by the Flaming Dragons, soon a rescue has to be planned - and the actors might just have to become the characters they\'ve been portraying.

There\'s a lot more to Tropic Thunder than mentioned here; some subplots involving Speedman\'s agent Rick (Matthew McConaughey) and Grossman, as well as "Fourleaf" and the pyrotechnic engineer Cody (Danny R. McBride) are all pretty funny as well. The humor might not go over with people who aren\'t keen on "Hollywood", but the film does a great job at lampooning the craft of acting and filmmaking. The speech that Lazarus gives Speedman about going "full retard" is brilliant, because he\'s giving it while going full blackface. It\'s that kind of humor that makes Tropic Thunder even funnier than the obvious gags, but there are certainly plenty of those as well. Dressed in a balding fat suit, Tom Cruise is great as Grossman, giving us his take on the quintesential studio chief (one can only wonder if he had any particular people in mind), and Robert Downey Jr. is nothing short of brilliant.

But the problem with Tropic Thunder is that it seems like Stiller had almost too much money to make the film. There is a lot of excessive explosions and flashy things, and I think it almost feels like it was a way to justify the budget. The other problem with the film is that it peaks in the first five minutes. There are fake trailers (and commercial for "Booty Sweat") that precedes the actual film, and those are so absolutely hysterical and amazing (they even got Universal, New Line Cinema and Fox Searchlight to approve the use of their logos) that it\'s hard to see how the rest of the movie would keep that energy. And sadly, it doesn\'t, but it\'s still pretty darn funny stuff.

Tropic Thunder is rated R, and for good reason. There\'s a lot of drug references, swearing, and gory violence. Yes, that\'s right - it\'s a blood-and-guts type of war movie, and that\'s fine - but it might surprise some people who expected a silly Ben Stiller comedy. Composer Theodore Shapiro\'s score provides some rocking energy, and his send-up of the overly dramatic "Wailing Woman" moments (replete with vocalist Lisbeth Scott) had the audience laughing. It\'s always nice when the music can contribute to a joke. It\'s not a perfect film by any means, but it\'s certainly funny entertainment. You might not get all the humor if you\'re not familiar with the inside workings of Hollywood, but don\'t let the "controversy" dissuade you from seeing Tropic Thunder.