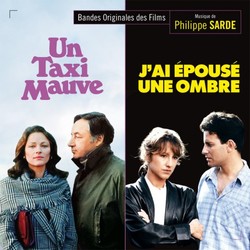 Based on the 1973 novel by Michel Déon, Un taxi mauve, directed by Yves Boisset, gathered an international cast (Philippe Noiret, Charlotte Rampling, Fred Astaire, Peter Ustinov, Agostina Belli and Edward Albert). Keen to obtain the most authentic result possible, Philippe Sarde hired The Chieftains, a world-famous band from Dublin that had recently risen to popular fame thanks to their acclaimed contribution to the score of Stanley Kubrick's Barry Lyndon. Combined with the rich sound of the strings section of the London Symphony Orchestra that flows in and out like ample waves of emotion, the tin whistle of the band's leader Paddy Moloney and the Celtic harp of Derek Bell instantly give an essential feeling of truthfulness to Yves Boisset's pictures. This present edition features the same content as the original vinyl presentation, including the Sonata In A Minor Op. 42 by Franz Schubert performed by Roger Woodward. This new edition has been remastered from superior master elements.

J'ai épousé une ombre enabled director Robin Davis to work again with Philippe Sarde after their first meeting for The Shock (1982). Adapted from the novel I Married a Dead Man written by William Irish, Davis and his co-scriptwriter Patrick Laurent transposed their adaptation in the Bordelais vineyards in France. The film stars Nathalie Baye, Francis Huster and Richard Bohringer. The composer was inspired by the shots of ponds and vineyards that punctuate the film and proposed a bright and colourful musical approach with a romantic and lyrical score. For this newly remastered and expanded edition, Philippe Sarde wanted to propose a musical arrangement of the pieces in the shape of an orchestral suite, including previously unreleased tracks.

Remastered from the original master tapes, the program has been assembled, produced and supervised by Philippe Sarde and Édouard Dubois. The CD comes with a 12-page booklet with liner notes by Christian Lauliac, discussing the films and the scores including new comments by Philippe Sarde on his collaboration with the two directors.