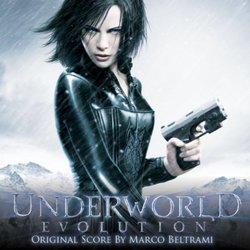 He\'s done vampires (Blade II), he\'s done werewolves (Cursed), and now Marco Beltrami takes them on together in Underworld: Evolution. Like his previous score in the dark fantasy genre, Hellboy, Beltrami uses an orchestra heavy on the lower-pitched instruments with a mix of creepy electronics to give the film a needed otherworldly or underworldly sense. Also like Hellboy, Beltrami has a number of strong themes, but his music is not well-represented on the album and they are not present enough for a listener to pick out well at all. Also surprising is the film-order of the cues, which makes the first half of the Lakeshore Records\' disc very slow before it picks up towards the end.

Some of the slower parts of the score showcase a few of the thematic elements of the score, such as in "William Captured" or "Patricide". The best parts of the score, however, are in the action music, which Beltrami tackled with fervor. Low brass and strings race along above pounding percussion rhythms in cues such as "Ol\' Timey Music" and "Kill Will 2". I do have to note some of the clever titles, such as the latter, which comes after "Trying to Kill Will" as well as "Mikey Doesn\'t Like It". The best cues are "Hell-Ride" and "Selene, Willie, and Marcus" which contain the brassy, darkly orchestral elements of the previously-mentioned action cues, but with the addition of a pulsating low string line in the tradition of recent Hans Zimmer scores, such as Batman Begins.

The score portion of the album closes with "Finale" which is a slower, but uplifting cue containing some more thematic hints. The album ends with two mostly forgettable rock songs, which is odd since there is a rock compilation soundtrack release as well. Fans of Beltrami\'s past vampire work or the score to Hellboy will enjoy this one, but I think the release itself could have been better thought out.