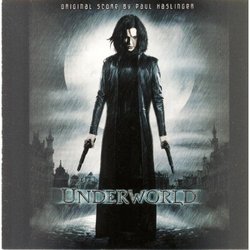 Although dismissed by many a critic as a simple ghouls and goblin gothic retelling of tales that have been often told before in recent film adaptations, I found Underworld to be surprisingly entertaining and fresh.  It is not Blade (nor any of its sequels) nor is it Interview with the Vampire, but takes some of each in adapting the retelling of vampirism and their relations with the other metamorphing monster of yore, the werewolf. The music was interesting in both regards, garnering both a score as well as a song soundtrack, and unlike many of the films that involve both the pop side and score side in the film, neither seemed too obtrusive and it ended up being quite balanced.

Paul Haslinger was tapped to provide the underscore for the film. A veteran electronic pop musician as a member of Tangerine Dream, his work isn't as klinky/klanky as typical artists who transitioned from that world. The music here pulls from its gothic roots, including atmospherics, but with a modern techno basic root, with percussion helping to drive the feel. This integration has a bit of a Dark City feeling, and since Haslinger's score is more of a soundscape which is painted over scenes within the film, the CD runs together, even though many of the tracks are out of sequence with the film. Being that it takes this form, it's not very melodic either, but it does work very effectively for the film, and that's the most important part.

It would take a bit of time directing where the song soundtrack weaves in with this score release, but as mentioned above they weave together effectively in the finished film. One "song" does make it in this score release however, Agent Provocateur's "Red Tape", whether the song release ran out of room, I'm not sure, but it does bring the CD back up to pace and offers a nice break from the first piece of Haslinger's score.

The sequel to the film, Underworld: Evolution, is due for release in early 2006, with the groundwork for it well ensconced within the mythos and story of the first film. Haslinger isn't returning; he has been replaced by composer Marco Beltrami.  For those looking for a less-gory alternative to the slasher films of Freddy, Jason, and their demon spawn, this is a recommended film that doesn't treat you like a mindless zombie theatergoer.