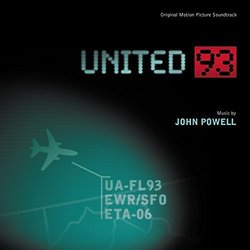 With United 93, composer John Powell takes on a genre that is a stark contrast to his other scores this year, Ice Age: The Meltdown and X-Men: The Last Stand. Whether or not America is ready, this year brings us two films about September 11. One might expect a patriotic solo trumpet theme for something like this, along the lines of Jerry Goldsmith\'s moving tribute cue from The Last Castle, but that has more of a place in the forthcoming World Trade Center. For United 93, Powell takes the task of the musical accompaniment very seriously and the end result is a dramatic and, in many ways, a beautiful score.

There is no obvious theme present in the score, which is a definite change from Powell\'s other works this year. United 93 has the dramatic tone of Powell\'s I Am Sam and the electronic and percussive nature of his Bourne scores. The album opens and closes quietly with "Prayers" and "Dedication" which contain chilling vocals by Powell\'s son, Oliver, over light string chords. A combination of electronic percussion beats and drums keep the atmospheric score moving. Other vocals - wordless choir, mostly - make brief appearances, as in "Pull the Tapes". The end of this cue also contains the first appearance of the French horns.  They are used as a tone color and elevate the score very subtly; their entrances in slow crescendos can often be missed ("2nd Plane Crash").

With "The Pentagon", Powell begins to escalate the sound a bit, bringing in harsher drum beats and a slightly elevated tempo. This cue moves into the ten-minute "Phone Calls", which also features a very brief reprise of Oliver Powell\'s vocals. Low strings introduce a new motif that is fast and tense and the horns take on a brassier, urgent tone. All of this builds to "The End", which is the least subtle of the cues, with layered percussion instead of lone beats and a constant brass presence. Like the horn crescendos, one can listen to this album without really paying attention, but when this cue suddenly begins to play, it will be instantly noticed. Only the very careful buildup through the rest of the album allowed this to happen and Powell does this very well. It is not as enjoyable an album as, say, X-Men: The Last Stand, but it is as memorable in a different way.

As "The End" builds, the drums get even faster and the strings dominate again with slow crescendos in the horns. While Powell uses some electronic beats and synth bass to underscore the music, the use of the orchestra and careful layering of percussion and brass lines makes this a surprisingly good suspense/dramatic score. There is no fanfare or requiem; the album closes as quietly as it opened, with a bit more of an orchestral presence than "Prayers" but with a similar effect. I like how Powell is branching out to new genres and he has shown this year that he can do so without beginning to sound repetitive. It may take a listen or two to get used to this score, but it is definitely worth taking the time to do so.