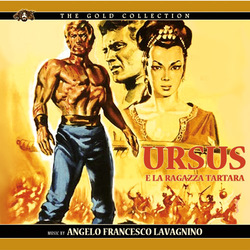 The score was never released before in any format and is a worldwide exclusive to Kronos Records, courtesy of the SUGAR / CAM Vaults. The CD contains all the music Maestro Lavagnino composed for the film presented in film order, including various pieces that did not make it in the film, since production used stock music instead of these original pieces. A big orchestral score for this epic adventure film, with a peplum flavour in unique Angelo Francesco Lavagnino fashion! and conducted by another of Italy's Golden Age composers, Carlo Franci.