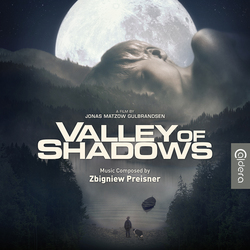 Caldera Records is proud to present the score for the motion picture Valley of Shadows from 2017, directed by Jonas Matzow Gulbrandsen, featuring music by Zbigniew Preisner.

The story of Valley of Shadows was inspired by a wide variety of sources, mostly going back to the director's childhood: "I am interested in fables and allegories, in mythology and children's tales, these stories that we often believe are regional but are actually extremely universal, sometime with a moral and often with joyful gravitas. One example is Draumkvedet (The Dream Poem), a Norwegian ballad from the Middle Ages. I read a lot when I was a child – traditional stories of course – but especially Swedish literature for children. As a child, I thought a lot and was hungry to learn. Reading Bruno Bettelheim was also something that I draw greatly from."

When it came to selecting the composer for the film, Gulbrandsen used his familiarity with the Polish film industry to get in touch with a living legend of the field. Born in Bielsko-Biała in 1955, Zbigniew Preisner has been composing music in his native Poland since the early 1980s. He is best-known for his work with Polish director Krzysztof Kieślowski on his epic Three Colors trilogy. The collaboration was ground-breaking in more than one sense for the composer – it wasn't only the fastest score he has ever realized, but it also introduced him to new concepts as he explains: "Jonas had the vision of having mostly electronic music, that it should be narration in film, and that it should be played from the beginning to the end. I am not fan of such usage of music in film but in this case, the director turned out to be right. The combination of symphonic and electronic music gave an amazing effect, though this was the first time I used so much electronics for a picture." For the highlights of the score, the combination of electronic and symphonic elements is augmented by the voice of Lisa Gerrard who appears in both Valley of Shadows and Valley of Shadows – Wake Up. Connected by the middle passage entitled Odyssey, this 18-minute long, almost continuous segment underscores the moments as Aslak finds something he cannot comprehend.

The 28th CD-release of Caldera Records features a detailed booklet-text by Gergely Hubai and elegant artwork by Luis Miguel Rojas. The CD was produced by Stephan Eicke and John Elborg.