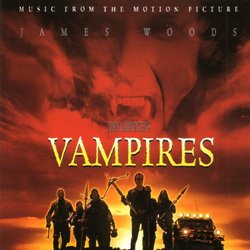 The soundtrack to John Carpenter's Vampires is quite a stylistic departure for the man. In keeping with the Western theme of his new movie, Carpenter has fashioned a bluesy, guitar-driven score for his vampire-fest, which is highly reminiscent of Ry Cooder's action scores. Although not completely discarding his usual synthesizer-based score, it definitely takes a back seat to the Carpenter's make-shift blues band, The Texas Toad Lickers, which features many original players from the Blues Brothers Band.

Where Carpenter's scores for Big Trouble in Little China and They Live featured guitar work to support the synthesizer score, here the guitars are brought to the forefront. It sounds different, but it's unmistakably Carpenter. The main theme, "Slayers", could be looked at as a more upbeat, bluesier version of the main theme in They Live. For the most part, the soundtrack presents down and dirty guitar riffs to perfectly complement James Woods' mean-as-a-rattlesnake attitude. To be sure there are quiet passages to round out the package.

Particularly well done is the Spanish guitar-influenced "Santiago" for the scene when Woods and Baldwin first enter the seemingly deserted community of Santiago. As the slayers stalk the quiet streets, the music strikes a perfect balance of infusing the characters with nobility and loneliness. This theme pops up again at the end as the two friends bid each other farewell in true western fashion.

Most of the synthesizer and orchestral pieces are used during the action scenes. Carpenter wisely avoids using guitars during these scenes that would have given them an MTV-pop feel. It takes a few listens to get used to Carpenter's new sound, but it quickly becomes addictive. All in all, this is a thoroughly enjoyable soundtrack.