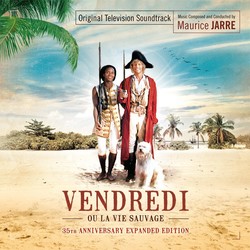 Music Box Records re-issues one of its bestselling, now out-of-print CDs: Maurice Jarre's Vendredi ou la Vie sauvage is given a new 2-CD edition with 50 minutes of previously unreleased music and new liner notes discussing the film and the score for the 35th anniversary of the series.

The score offers a very rich symphonic score by turns melodic, flavorful and exciting. The numerous themes perfectly evoke all the wide-ranging emotions, from the savagery of island life (muted percussive motif played on bass kettle-drums...) to the beauty and solemnity of friendship between Robinson and Friday (use of Ondes Martenot and solist instruments such as harp, oboe...).

Music Box Records presents the complete edition of Maurice Jarre's masterful score. Our first edition (which is now out-of-print) added 20 minutes of never before released material to the LP program, but this two CD edition features another 50 minutes of brand new material, including different versions of the theme song performed by Alexandra Brown. The package includes 8-page liner notes by Gergely Hubai discussing the film, the score and the discographical background of Jarre's magnificent television score.