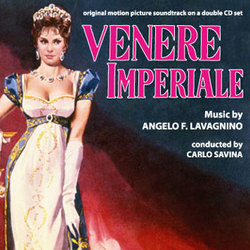 Digitmovies is proud to present on a double CD set (which opens the brand new de-luxe digipack series) the complete OST by Angelo F. Lavagnino for the movie "Venere Imperiale" (aka "Imperial Venus").

C.A.M. released a 33 rpm LP (Cms. 30-052) which was then reissued on a CAM CD (CSE 045) in 1991 and contained thirteen selections in mono with a total of 47:15 minutes. By looking at the cue sheets attached to the mono master tapes of the original sessions, we realized that most of the tracks on the album were in fact suites assembled by the author at the time for record purposes. So thanks to the master tapes stored in optimal condition, we could create the definitive presentation of this important international movie OST on a double CD with a total duration of about 140:48 minutes.

CD 1 contains the material edited and assembled for the album, followed by the film versions (about 93') of the OST with each take presented individually as it had been recorded for the film and then continuing on CD 2. In fact, we have also discovered a lot of unreleased music that appears here for the first time ever. The Maestro Lavagnino has written an epic and romantic main theme for the protagonist (Tr. 1) which is reprised within the movie (as in Tr.2, Tr.5, Tr.8) and which gets alternated with lively court dances like the Gavotte and others (as in Tr.4, Tr.6, Tr.7, Tr. 10). The orchestra was masterfully conducted by Carlo Savina. A proper rescue and preservation of an Italian Silver Age score and of the musical art by Angelo F. Lavagnino.