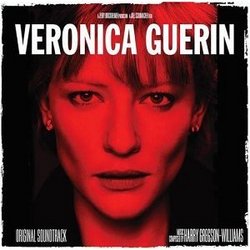 So many soundtracks today rely on sheer volume of sound or unrelated rock and pop songs that it is an astounding experience to hear a score as authentic and grittily real and emotional as Harry Gregson-Williams' work for Joel Schumacher and Jerry Bruckheimer's Veronica Guerin starring Cate Blanchett. The orchestration relies on violins or piano for most of the music, which is strengthened a few times with some light brass and percussion. The feel of this music immediately brings to mind the soloistic approach John Williams took to Schindler's List or James Horner's Braveheart.

More impressive than Gregson-Williams' score are the two songs performed by Sinead O'Connor that open and close the album and "Bad News" performed by Brian O'Donnell from the scene following Veronica's murder. Gregson-Williams wrote and orchestrated these songs, performed emotionally by O'Connor. "Bad News" is probably the most touching track on the album, as Gregson-Williams outlines in the liner notes. He heard a boy (O'Donnell) singing on the street for money in Dublin when he arrived to spend a few days on the set of the film. Later, he tracked the boy down again and recorded him singing six or seven folk songs a Capella in a quiet alley. Gregson-Williams chose "Fields of Athenry" from the recording and added his own music around the song for the moving scene to create a piece of music that is as authentic as one could get. Easily the best track on the album, Gregson-Williams' most complex orchestration with violin, flute, and french horn follows O'Donnell's song, backed by light marching percussion.

Harry Gregson-Williams claimed in an interview that he does not like scoring major action films like Armageddon per standard Media Ventures style; he would much prefer either the animated material he is well known for, or more dramatic films such as Whole Wide World or Veronica Guerin. His passion and talent for music shine in the way his music flows with such an astoundingly genuine feel. I began to follow his career with the release of his score to Spy Game, which contained cues of all genres. What is more enjoyable are the small ways Gregson-Williams makes his music unique: in Spy Game, he scored the love scenes with a boy soprano, yet still brought in the pounding electronics or soaring brass when necessary. Veronica Guerin is no different. There are some soft electronics, similar to his work in Phone Booth, but there is mostly Irish-flavored music on violin. And again, the use of the recorded Irish lad on the streets of Dublin is as unique as it comes for today's overscoring of films. Gregson-Williams took a similar approach to scoring this film as Hans Zimmer did when scoring Black Hawk Down.

Following Sinead O'Connor's opening song, "One More Day", the score begins with "Dublin 1996", which introduces the main theme. It is the tune to which "One More Day" is sung to, but it takes a full listen through the album to recognize it because it is subtle and almost ephemeral, but very powerful at the same time. "Driving" and "Research" are the most traditional-sounding Irish music on the album with a up-tempo electric violin jig performed by Hugh Marsh. Marsh's electric violin is a common sound in Gregson-Williams' scores since Armageddon in 1998 and Marsh even co-wrote the songs for this film, performed by Sinead O'Connor. "The Killing" is one of the highlights of the album that begins with Marsh's violin, backed by strings and percussion, performing a version of the main theme. As I mentioned before, the best track of the score is the second half of "Bad News" following Brian O'Donnell's vocals. A solo horn takes over from the violin for parts over moving percussion, similar to parts of Nick Glennie-Smith's Highlander: Endgame. The score ends with "Never Show Your Fear", a slow version of the theme on piano, then solo violin. "The Funeral" closes the album out with a short reprise by Sinead O'Connor.

The few standout tracks are such on first listen, but the small subtleties of the music are what make this score so powerful. As I mentioned before, it is those few unique ideas, such as O'Donnell's performance in a Dublin alley or the gentle suspensions in the chords, that make Harry Gregson-Williams' music so enjoyable. He has proven over the past few years that he can write music in any genre - from Spy Game to Sinbad: Legend of the Seven Seas to Veronica Guerin - easily breaking free of the stereotypical "Media Ventures" sound. Veronica Guerin is one of the most powerful and authentic scores to come out since Black Hawk Down and could easily be one of the best of 2003, though it will likely turn out to be a hidden gem amidst the more mainstream releases of the entertainment industry.